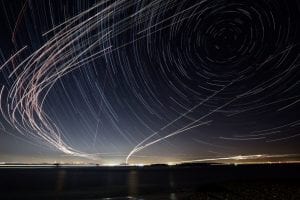 A Peter Mauney time-lapse photo of the night sky.

Art and aviation fly high in a perfect connection at the new Quad City Arts Art at the Airport exhibit with “A Trip Back in Time” at the Quad City International Airport, Moline.

The new exhibit – on display through March 1, 2021 – features Drew Morton’s digital drawings of airport runways, Peter Mauney’s time-lapse photographs of airplane arrivals and departures along with a selection of mid-century modern artifacts on loan from Fred and Ethel’s antiques store in Rock Island, the Putnam Museum and Science Center in Davenport, and private collections.

Drew Morton of Iowa City explained in a recent release: “This series of airport runways emerged from a larger series called my ‘everydays’ where I created a piece of digital art every day for eight years. It allowed me to fall into and explore different styles and techniques. For designing these images, I began by looking at airport runway 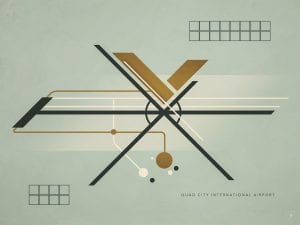 maps and blended them with my not-so-secret love of mid-century design elements.”

The digital drawings on display represent actual airport runways around the world, including Moline’s.

Pete Mauney works in Tivoli, N.Y., where he lives with his photographer wife and two young 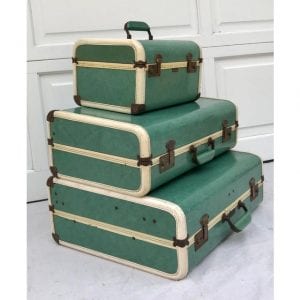 1950s luggage from JC Penney’s is part of the new “Art at the Airport” exhibit.

children. He studied film at New York University before taking a break, eventually receiving his BA and then MFA in photography from Bard College.

Always a night person, he has been photographing in the dark since his first serious roll of film. For this series, he camped out in select locations for hours at a time with his camera aperture open to capture the light emitted from airplanes and stars as they moved through the night sky.

Both artists’ works can be seen and purchased online at www.quadcityarts.com/art-at-the-airport.html.

Art at the Airport in the Q-C airport gallery is easy to find. It is just across from the gift shop and restaurant and right before the security checkpoint. The gallery never closes, and you will pay just a dollar for parking.