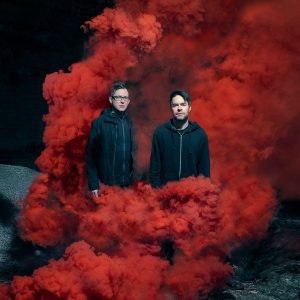 Chevelle is the understated musical powerhouse who have continually delivered rock anthems for the past 24 years. 7 number one hits, 17 songs reaching the top 10 charts, over 4 million records sold in the USA and many more worldwide.

Platinum and gold albums across their 8 studio records and successful live CD and two live DVD releases completes their extensive body of work to date. It’s all credit to their continuing dedication to be true to their craft, the genre and their fans.

With no signs of this Chicago alternative rock trio slowing down any time soon, their numerous chart-topping releases have certainly earned this band a place in American rock music history.

After more than two decades together, numerous releases, and countless worldwide tours, the band consisting of brothers, Pete Loeffler [guitars, vocals] and Sam Loeffler [drums], have confidently sailed through decades of uncharted waters and have emerged with a collection that’s equally intricate and intimate.

Sean Leary
Sean Leary is an author, director, artist, musician, producer and entrepreneur who has been writing professionally since debuting at age 11 in the pages of the Comics Buyers Guide. An honors graduate of the University of Southern California masters program, he has written over 50 books including the best-sellers The Arimathean, Every Number is Lucky to Someone and We Are All Characters.
See More Articles From Sean Leary
Tagged: chevelleEast Molinequadcities concertsRust Beltupcoming concerts