Solar energy is coming to the Quad Cities International Airport by late this summer.

Solar panels affixed to the terminal roof and a new carport structure will provide a clean, renewable energy source for the airport, and a 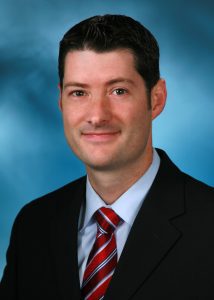 Ben Leischner is executive director of the Q-C Airport in Moline.

covered parking option for nearly 200 spots in the short-term lot – at no cost to the Moline airport. Two additional electric vehicle charging stations will be added to the existing three once the project is completed.

At the time of this announcement, only 20 percent of public U.S. airports are using solar power.

“We are fortunate to have this opportunity to bring a clean energy source to the airport to offset the footprint that airports create,” QCIA executive director Benjamin Leischner said in an airport release.

“The bonus is being able to offer an additional amenity to our passengers. I can’t tell you how many cars our public safety team digs out each year,” he said. “Now, travelers will have the option to park under a covered structure so they don’t have to scrape ice or dig out after a winter storm when they’re tired and just want to get home.”

The Quad Cities International Airport solar energy project is planned to be done by the end of the summer.

mounted solar system. This grid-connected distributed generation system will generate enough power to offset more than 50% of the airport’s current usage. The airport anticipates saving millions of dollars for energy expenses over the life of the system.

There is no cost to the airport. The Power Purchase Agreement was made possible through federal and state renewable energy incentives that subsidizes a portion of the cost to install the system. Solar USA (the owner/developer) funded 100% of the cost of the system, and the Q-C Airport agreed to purchase 100% of the renewable energy the solar system generates at a discounted energy rate.

Solar USA — as the owner/developer and financier of the project — will oversee all phases of the construction process and committed to hiring local contractors to ensure local employment. Solar USA engaged professional services of WCP Solar Services, LLC, Moxie Solar, Inc., General Constructors Inc., and Davenport Electric Contract Company. More than 50 local employees will have worked on this solar project upon completion.

This project, initially announced in 2019, is making strides after delays due to Covid-19, the airport release said, noting the project is expected to be completed by the end of summer 2021.

Jonathan Turner
Jonathan Turner has been covering the Quad-Cities arts scene for 25 years, first as a reporter with the Dispatch and Rock Island Argus, and then as a reporter with the Quad City Times. Jonathan is also an accomplished actor and musician who has been seen frequently on local theater stages, including the Bucktown Revue and Black Box Theatre.
See More Articles From Jonathan Turner
Tagged: alllianceben leischnergreen energygreen new deallocal airportsMolinequad cities international airportquad city airportQuad City International Airportquadcities international airportsolarsolar powertsa