In the moving play, “The Curious Incident of the Dog in the Night-Time,” audiences get inside the mind of a 15-year-old gifted autistic boy. Augustana College will present a recorded live performance of their production online at 7:30 p.m. Thursday through Saturday and 1:30 p.m. Sunday. 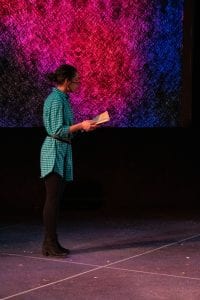 Ravyn Davis in the Augustana production, filmed at Brunner Theatre.

The 2012 stage adaption of British novelist Mark Haddon’s 2003 international best-seller originally was scheduled to be performed last December, but was postponed due to the pandemic.

Student tickets are free, but must be purchased by first requesting a complimentary code. Faculty and staff tickets are $8; or $10 for the public, available HERE. All tickets must be reserved by 5 p.m. for the March 4-6 presentations and by noon on March 7. The Friday night stream features understudies in the roles.

The “Curious Incident” story is told from the perspective of a 15-year-old gifted autistic boy determined to find out who killed his neighbor’s dog. Although discouraged in the pursuit by his neighbors and his father, he persists, and he learns some things about his parents that change his world.

Christopher has never ventured alone beyond the end of his road, he detests being touched, and he distrusts strangers, according to a synopsis. Seven minutes after midnight, he stands beside his neighbor’s dead dog, Wellington, who has been speared with a garden fork. 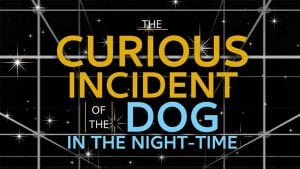 Finding himself under suspicion, Christopher is determined to solve the mystery of who murdered Wellington, and he carefully records each fact of the crime. But his detective work, forbidden by his father, takes him on a thrilling journey that upturns his world.

Right after the book was published, author Haddon talked to WHYY’s “Fresh Air” about the main character, Christopher. “He has a serious difficulty with life in that he really doesn’t empathize with other human beings,” he said. “He can’t read their faces. He can’t put himself in their shoes. And he can’t understand anything more than the literal meaning of whatever’s said to him.”

The stage production uses lighting and sound effects to help the audience understand Christopher’s experience of the world. At Augie’s Brunner Theatre mainstage, it was recorded and edited in the last two weeks.

“The Curious Incident of the Dog in the Night-Time” on stage earned six Tony Award nominations in 2015, winning five, the most of any play that year.

Jeff Coussens, Augustana’s director of the new production, wrote for his program note:

“To say that putting together a theatrical production during a pandemic is difficult would be a gross understatement. Theatre companies 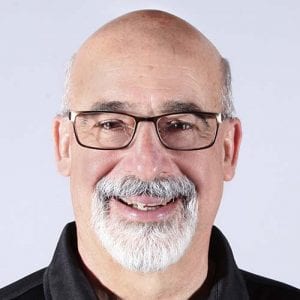 Jeff Coussens is an Augustana College theater professor and chair of the theatre arts department.

across the nation and indeed around the world have been struggling to not only keep their doors open, but to keep the art of theatre alive. Had I known about the approaching pandemic when we were planning our 2020-2021 season, I may have looked for a different title.

“Perhaps a play with only one or two characters would have been a more appropriate choice. But as I was thinking about how I could conform to Covid-19 requirements while constructing this beautiful story of Christopher, a young man who happens to be on the autism spectrum, and his journey of self-discovery, I happened to be binge-watching a docuseries called ‘Love on the Spectrum.’

“As the title suggests, the series features young adults on the spectrum who are trying to meet and date other people with similar life challenges. I was particularly moved by an interview with Olivia, one of the featured individuals in the series,” Coussens said.

“When asked to describe how being on the spectrum has affected her social interactions with others, Olivia said: ‘Having autism is like being in a transparent box. No one can hear you. They can see you, but they can’t interact with you. You can bang on the wall, but you can’t get out of it. So, it’s very lonely being in the box your entire life. No one can get in and you can’t get out.’

“For me, Olivia’s profound description became a serendipitous inspiration. It reminded me that Christopher’s story needs to be told in the way that Christopher might tell it,” the director wrote. “Suddenly, wearing masks, avoiding physical contact, and maintaining physical 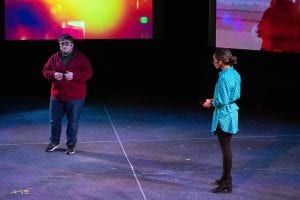 distance seemed appropriate to the performance.

“Since this is a memory play, Christopher’s interactions with other characters are in the past, so using video projections of actors allows the audience to experience the action through Christopher’s perspective from inside the transparent box that Olivia described,” the program says.

“In our production, the only live actors onstage are Christopher, his teacher Siobahn, who helps him tell the story, and the voices in his head. I hope that the choices we have made in the telling of Christopher’s story allow you to enter his world and understand his journey… from a distance.”

The play’s dramaturg, Augustana junior Keenan Ellis, wrote that the book and play take us on a unique journey.

“We are shown Christopher’s life and what it’s like to have autism. Through Mark Haddon’s novel and Simon Stephens’ play adaptation, we are shown how Christopher’s mind works, and how the surrounding world around affects him,” Ellis wrote.

“While reading the novel and play for the first time, I was given a new perspective on the neurological spectrum disorder of autism. Rather than viewing it as just a spectrum disorder or a disability, I now simply see autism as a different way of thinking.

“Christopher thinks and acts in a very different way than I do, and that, in my opinion, is exactly what Hadden and Stephens ask from us, whether it be as an audience member, as a theatre scholar, as an actor, or even as a reader,” Ellis said. “On that note, I challenge you as an audience to dive into the head of Christopher.

“Due to Covid-19, we all may sometimes feel as isolated as Christopher. Regardless of where he is, who he’s around, or what he’s doing,

The 2021 Mississippi Bend Players at Augustana live schedule has yet to be announced due to the uncertainty of covid.

Christopher wants to feel isolated and alone. This is how he feels comfortable, and how he wants to live. While you watch, think about the way Christopher thinks, feels, and functions, and open yourself up to a new way of viewing individuals diagnosed with autism.”

The cast includes James Wheeler as Christopher, the 15-year-old protagonist; Ravyn Davis as Siobhan, his mentor at school; Bradley Heinrichs as Ed, his father; and Jacqueline Isaacson as his mother, Judy.

A 2014 New York Times review of the Broadway debut of the play advised to “be prepared to have all your emotional and sensory buttons pushed, including a few you may have not known existed…And like Christopher, we are all continually trying to impose internal symmetry on the bewildering world outside. The great achievement of ‘Curious Incident’ lies in how it turns the stage into the ordering mechanism of Christopher’s mind.”

Jonathan Turner
Jonathan Turner has been covering the Quad-Cities arts scene for 25 years, first as a reporter with the Dispatch and Rock Island Argus, and then as a reporter with the Quad City Times. Jonathan is also an accomplished actor and musician who has been seen frequently on local theater stages, including the Bucktown Revue and Black Box Theatre.
See More Articles From Jonathan Turner
Tagged: augustana collgeBrunner Theatercurious incident of the dog in the night timejeff coussenslocal theatermark haddonQuadCities theater