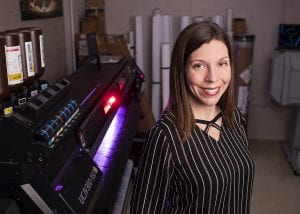 and then to VPC in August 2016. She was reclassified to her current position in July 2020.

According to her nominator, she worked several weekends helping with the design and production of several items needed in the University’s Emergency Operations Plan during the pandemic.

“During all of these requests, which were often at the 11th hour, she kept a positive attitude and understood the importance of what WIU was trying to accomplish,” said her nominator. She produced mass amounts of posters, floor decals, entrance/exit signs, directional signage, etc., then coordinated with Facilities Management for placement. She is transparent with timelines, and always looking to meet deadlines, putting her best foot forward with a short staff.”

Sean Leary
Sean Leary is an author, director, artist, musician, producer and entrepreneur who has been writing professionally since debuting at age 11 in the pages of the Comics Buyers Guide. An honors graduate of the University of Southern California masters program, he has written over 50 books including the best-sellers The Arimathean, Every Number is Lucky to Someone and We Are All Characters.
See More Articles From Sean Leary
Tagged: employee of the monthnatalie divanquadcities collegesquadcities universitiesWestern Illinois UniversityWIU