Flowing Water, Falling Flowers by Xixuan Collins, a new tome from Midwest Writing Center Press + Xixuan Collins, will be released during a livestream from 7 to 9 p.m. tonight on Zoom and Facebook Live.

The event is free. Local book fans are invited to join MWC  for the release of Xixuan Collins’s debut novel, Falling Water, Falling Flowers. The event will include a reading from the book, conversation between Collins and author Misty Urban, Q+A, and giveaways.

Email sarah.elgatian@mwcqc.org to RSVP to the Zoom event! 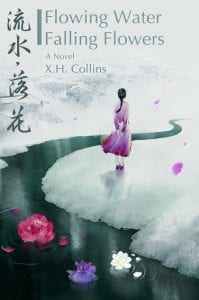 Xixuan was born in Hechuan, Sichuan Province, China, grew up in Kangding, on the East Tibet Plateau, and now calls Iowa home. Although always wanting to be a writer, she chose a career path of science and earned a MS in cell biology and a PhD in nutrition, and has taught biology at a community college for the past fifteen years.  When she’s not teaching or writing, she enjoys spending time with her family, reading, dancing (ballroom and Latin), and cooking.

Xixuan began writing in English in the summer of 2015. The second short story she had ever written in English placed third in the 2016 Iron Pen Contest, a 24-hour writing contest organized by the Midwest Writing Center. A flash fiction piece earned the honor of “editor’s favorite” in the River City Readers’ Flash Fiction Contest in 2016, and another placed second in 2017. A short story has appeared in the MOON Magazine and its anthology Out of this World: The Best Short Stories from The MOON.

She’s currently working on her second novel, a story about an extraordinary woman and her ghost mother.

Here’s a synopsis of the book:

When she loses her job and her lover in one fell swoop, art history professor Rose Ming agrees to accompany her mother on an annual visit to relatives in her Chinese hometown of Three Rivers. Once there, Rose learns that she, her mother, aunt, and her cousin, Hong-Mei, have all shared a strange dream prompting them to search for an ancestor nobody seems to remember. With her future uncertain, Rose decides to solve the family mystery, and instead unearths an unutterable tragedy hidden for over a hundred years.

Living in the last decades of the Qing dynasty, Peony, Lady Han, has every material comfort, a doting husband, and two beautiful children. With so much to share, she decides to adopt Jasmine, the daughter of her devoted maidservant, A-mei, giving her the advantages of a comfortable upbringing. But while Peony’s daughter, Iris, embraces Jasmine as a sister, the new addition to the family has deeper repercussions throughout both families, altering more than one future. And when Rose discovers the true history of the Han and Wang families, including their unbearable losses, she learns the meaning of love, friendship, family, faith, and the sacrifices people are willing to pay to achieve them, a lesson that allows her to face her own future with new courage.

Sean Leary
Sean Leary is an author, director, artist, musician, producer and entrepreneur who has been writing professionally since debuting at age 11 in the pages of the Comics Buyers Guide. An honors graduate of the University of Southern California masters program, he has written over 50 books including the best-sellers The Arimathean, Every Number is Lucky to Someone and We Are All Characters.
See More Articles From Sean Leary
Tagged: flowing water falling flowerslivestream eventsMidwest Writing Centerx.h. collins