Sean Moeller Throwing A New Party For The QCA 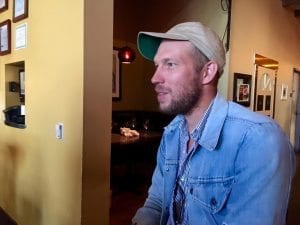 Sean Moeller has proven that he knows how to throw a great party.

The guy behind the creation of Daytrotter, Daytrotter Downs, Moeller Mondays and Moeller Nights is popping the cork on yet another celebration of music and culture for the Quad-Cities, the Gas, Feed and Seed Festival.

According to Moeller, “The three-day event will take over the historic and cozy Village of East Davenport and will bring the best and the brightest from music, comedy and culinary arts to town, with over 25 artists performing nearly 40 sets in multiple venues. The headline shows will take place in The Village Theatre and Baked, but the festival will also feature unannounced after-hours acoustic sets, collaborations, comedy routines and jams in participating establishments throughout the Village until closing time.

“One of the unique features of the festival will be a kick-off dinner where festival goers and the performing artists will be dining together family style at Baked on Thursday night. This intimate opportunity is available to only 100 people and there will only be total 350 3-day passes sold in all, creating a very limited and special experience.

“Already set to perform — Sir The Baptist, a hotly tipped R&B singer poised to be one of the breakout stars of 2017; Caveman — a rock and roll band from New York City in the vein of Dawes and Spoon; Campdogzz — a garage rock band from Chicago who will be playing arenas soon; TRACE — a folk singer from California with touches of Joni Mitchell and Beach House in her songs.

“Marijuana Deathsquads, REMSY, Wild Fur, Christopher Porterfield of Field Report, Kera & The Lesbians, Porlolo, Kingsbury, Ben Kronberg and Twain are also among the first wave of announced artists. The rest of the lineup will be announced in the coming days. Except some surprise guests as well.

“Tickets are on-sale NOW at www.moellernights.com .  Three-day passes are $50, three-day passes with Thursday dinner are $80 and single-day tickets are $35 each. Three-day festival tickets can also be had for $25 with the purchase of a GAS Pass, a new membership club for Moeller Nights shows. The GAS Pass gets holders in to all Monday shows for free, reduced ticket prices for all other Moeller Nights shows, one-of-a-kind on-the-spot recordings from artists, a Moeller Nights tee-shirt and other special perks for $25 a month.

Sean Leary
Sean Leary is an author, director, artist, musician, producer and entrepreneur who has been writing professionally since debuting at age 11 in the pages of the Comics Buyers Guide. An honors graduate of the University of Southern California masters program, he has written over 50 books including the best-sellers The Arimathean, Every Number is Lucky to Someone and We Are All Characters.
See More Articles From Sean Leary
Tagged: DaytrotterDaytrotter DownsFeed and Seed FestivalGasMoeller MondaysMoeller NightsSean LearySean Moeller