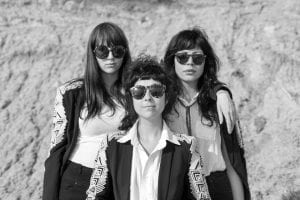 You can hang your coat on this: The Coathangers are coming to Daytrotter. The critically acclaimed band will perform at 7 p.m. July 29 at 324 N. Brady. Tickets are available at www.eventbrite.com.

The Coathangers’  latest, “Parasite” is the companion EP to their last album, “Nosebleed Weekend,” featuring vocals from all three members and showing the band baring their teeth a bit…

On Nosebleed Weekend’s release last April, was named album of the week by SPIN, and praise from Stereogum, Brooklyn Vegan, NPR, and more came through for it. Their live show was on fire last fall… and 2017 shouldn’t see them slowing down one bit!

Sean Leary
Sean Leary is an author, director, artist, musician, producer and entrepreneur who has been writing professionally since debuting at age 11 in the pages of the Comics Buyers Guide. An honors graduate of the University of Southern California masters program, he has written over 50 books including the best-sellers The Arimathean, Every Number is Lucky to Someone and We Are All Characters.
See More Articles From Sean Leary
Tagged: CoathangersDaytrotterNosebleed WeekendNPRSpinStereogum