I really wanted to enjoy Quad-City Music Guild’s first complete musical in a year and a half, “Monty Python’s Spamalot,” which is available to be streamed online June 11 and 12 at 7:30 p.m., and June 13 at 2 p.m.

The cast takes a bow at the end of the filmed Guild “Spamalot.”

But due more to its supremely silly, groan-inducing, seemingly unending source material than its eminently capable cast and crew, this two-hour-plus filmed version is disappointingly lifeless and unsatisfying.

Despite opening on the day where the state of Illinois is allowing all theaters to open at full audience capacity, the Guild months ago decided to stage “Spamalot” with no in-person audience and it was filmed June 5 from the Prospect Park theater in Moline.

varying sizes, but sitting through the interminable “Spamalot” lost my attention after just the first five minutes.

Part of it simply is just that I have never been a big Monty Python fan – comedic sacrilege, I know. But it really is an acquired taste, something you have to be in the mood for (or watching while drunk?).

Unfortunately, true to its title, this musical –  lovingly ripped off from the classic film comedy “Monty Python and the Holy Grail” – is the theatrical equivalent of Spam. With Music Guild, the “meat” is all the more mysterious since the ingredients all seemed top quality and should produce a delicious dish.

The wedding scene at the end of “Monty Python’s Spamalot.”

They are all individually tremendously strong in their roles, though the English accents are truly scattershot, but somehow don’t cohere into a funny, fulfilling whole.

With costume design by Heather Blair, lighting design by Steve Parmley, and sound by Kayla Sierra-Lee, “Spamalot” looks and does sound (for the most part) great, and you can tell that substantial effort has been put into making this the best production possible. But to me, it’s like the old saying about putting lipstick on a pig. In the end, you’re still left with a pig.

The 2005 show – an exuberant parody of the Arthurian legend and musicals in general – obviously isn’t meant to be taken seriously, and everyone’s tongue is firmly planted in cheek. Billed as an “outrageous, uproarious, and gloriously entertaining story of King Arthur and the 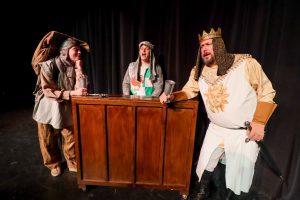 Lady of the Lake,” as they search for the Holy Grail, it had me genuinely searching for laughs.

The endless string of bits starts with a miscommunication between the actors and the narrator, as the ensemble sings about Finland (“Fisch Schlapping Song”). The Historian returns to tell the Finns that he was talking about England, not Finland.

Peitersen is imposing as King Arthur, traveling the land with his servant Patsy (an earnest Williams), who follows him around banging two coconut shells together to make the sound of a horse’s hooves. Groans continue after they meet two sentries (Sederquist and Walker) who are

Max Robnett makes his Music Guild debut in the show.

more interested in debating whether two swallows could successfully carry a coconut than in listening to the king.

It just seems to go on and on, and likely would be funnier if seen in person – and the video’s canned laughter and applause don’t help things. Neither does an inserted 10-minute “intermission,” which thankfully you can scroll through.

My favorite parts of the show are Vickers as the domineering Lady of the Lake (“Find Your Grail” is a true highlight), and the 23-year-old Max Robnett making an outstanding Guild debut in several colorful rules. With his elastic facial expressions and staggering range of emotions, he steals every scene he is in – even early on as an exasperated voice of God.

The last live show done at Guild (with a 535-seat capacity) was “The Best Christmas Pageant Ever” in December 2019, and the summer 2020

Rachel Vickers holds the Holy Grail atop the castle in “Spamalot.”

season of “Spamalot,” “Mamma Mia,” and “Matilda” was postponed to this year due to Covid. Of the three, just the first was available to purchase rights to film and show online. The other two this summer will be performed live with audiences.

“It was a tough decision, but I’m really happy with the product we’ve created,” “Spamalot” 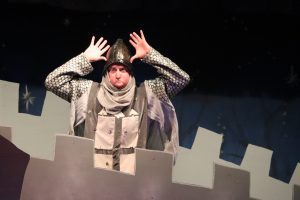 director Turczynski said before the show. “I think it’s really going to hold up well. We get to say we’re the one and hopefully only that ever does this out here at Music Guild.”

In addition to streaming the first show in its 73-year history, Music Guild is also using pre- 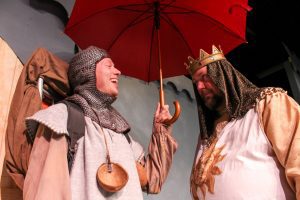 recorded orchestral accompaniment (and many sound effects) for the first time. The digital tracks are in the capable hands of “Spamalot” music director Callen Sederquist, who was the only one in the orchestra pit.

The sprightly ensemble also provides enviable amounts of enthusiasm, even while a few perform with face masks.

It all technically works, and the professional film production appears solid and smooth. It’s just not my cup of tea.

Jonathan Turner
Jonathan Turner has been covering the Quad-Cities arts scene for 25 years, first as a reporter with the Dispatch and Rock Island Argus, and then as a reporter with the Quad City Times. Jonathan is also an accomplished actor and musician who has been seen frequently on local theater stages, including the Bucktown Revue and Black Box Theatre.
See More Articles From Jonathan Turner
Tagged: MolineMusic Guildmusic guild reviewsonline theaterProspect ParkQuadCities theaterquadcities theater reviewsreviewsspamalot