For the first time since 1949, the sweet sound of music will not play in Prospect Park.

Quad City Music Guild became the latest arts organization to cancel its summer 2020 season, due to the Covid-19 pandemic, it announced Wednesday.

Following a March 13 decision to cancel the planned spring show, “The Secret Garden,” at Music Guild’s April 21 board meeting, they decided to cancel the three summer productions (all already cast) – “Spamalot,” “Mamma Mia!,” and “Matilda.”

“Our hope is to bring you these three shows, along with our previously canceled spring production, ‘The Secret Garden,’ in 2021,” they posted on qcmusicguild.com, noting this winter’s production, “Irving Berlin’s Holiday Inn,” is planned to go on as scheduled.

Box office volunteers will be reaching out to ticket-holders over the coming days. Updates will be provided on QCMG social media or at www.qcmusicguild.com/covid-19-response. 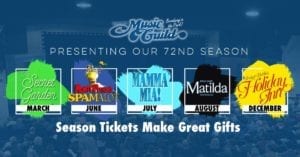 “During this difficult time, we would like nothing more than to come together to create and entertain. But, the health and safety of our volunteers, our patrons, and the Quad Cities community has to come first,” Music Guild posted.

The cast and crew of “Secret Garden” was five weeks into rehearsal, when the board announced the show could not go on (which had been scheduled for the last weekend of March and first weekend of April).

Board vice president Jennifer Sondgeroth said Wednesday that both decisions (then and now) “were extremely difficult and I’m proud of the discussion our Board of Directors had and the care and thoughtfulness they took in making them. This has obviously never happened in Guild’s 72-year history,” she wrote by e-mail.

“All of our shows are equally important to us as an organization, but even more important is the health and safety of everyone involved.”

Rehearsals for Monty Python’s “Spamalot” were due to start May 4, with performances planned to open June 12.

“We have been following the Governor’s press conferences closely,” Sondgeroth said, noting the Illinois “stay-at-home” order is effective through April 30. “Even once the firm stay-at-home orders are lifted, he anticipates limits on crowd gatherings, possible requirements of face coverings, etc. The pandemic itself is driving the timeline.”

With the April 30 deadline approaching, Gov. J.B. Pritzker said this week officials are looking to make changes to the order as the peak of the virus continues to drift further into the future.

Illinois may not hit its peak of coronavirus spread until mid-May, and with that in mind, Pritzker’s administration is looking into changes, he said. Through Wednesday, Illinois has reported 1,479 deaths due to Covid-19 (out of a nationwide total of over 41,000), and Iowa has seen 90 deaths.

There are now over 816,000 cases nationwide – including 463 in Rock Island and Scott counties, and eight deaths, as of April 20.

“It is unclear at what point large groups can gather safely, but it is unlikely to occur this summer,” Sondgeroth said. “By reports, the Midwest has not reached its peak in the pandemic yet, while the New York area has…Of course, we will continue to follow guidelines from the government and public health agencies in making that decision.”

It’s Music Guild’s hope that the four 2020 shows affected by the pandemic will be produced and performed as intended in 2021, with as much of the current cast/crew as possible in place.

“Of course, we need to speak to the theatre houses that hold the rights to the shows to request date changes for our performances,” said Sondgeroth, a frequent Guild performer herself. “Our president, Troy Stark, is already in the process of doing that.”

“No one knows when Broadway will reopen, but it’s not going to be soon. Summer? Fall? Next year? What’s clear is that an industry that packs large groups of people into small spaces, that depends on tourists and seniors to fill seats, that is risky for investors and costly for fans, is going to need time to rebound.”

In the area, Clinton Area Showboat Theatre, Mississippi Bend Players and the Genesius Guild have announced cancellation of their summer seasons. Because of the state-mandated order, Circa ’21 in Rock Island canceled its “Saturday Night Fever” production, and will remain closed until the governor’s mandate is lifted.

It has not announced changes yet to its next show, “Disney’s Beauty and the Beast,” which is scheduled to open May 22. Circa’s marquee currently says “Stay Safe…The Show Will Go On.”

“The cancellation is certainly not what I envisioned for this year,” Sondgeroth said. “I’m always so proud of what Music Guild creates and I’m heartbroken for those who thought they would be performing and working together to bring our shows to life.

“I’m sad for the audiences that will have to wait to see these beautiful, funny, touching productions. But, I’m also proud,” she wrote. “I’m proud of the commitment the members of our organization have to protect each other’s health and lift each other up during a global tragedy. I’m proud of people’s ability to see that these decisions were made for the greater good of our community, even though they are hard for us personally.

“I’m proud of the offers of help to work through the countless tasks that come with canceling the majority of a season. I’m proud of our patrons’ generosity — many were in a position to donate back the cost of the ‘Secret Garden’ tickets, and a substantial percentage did. And I’m proud of the resolve of our organization to come back and provide some much-needed music and fun and light to the Quad- Cities community just as soon as we can,” Sondgeroth said.

Guild also usually selects plays each spring for the following year. Those meetings, which are open to the public, were already postponed due to social distancing guidelines and the stay-at-home order, she said.

“We will revisit the play selection process as needed once we hear from the theatre houses about the shows that were scheduled for this season.”