Tristan Tapscott March 19th, 2021 Tristan Tapscott, Theatre, Reviews, Moline, Events, Entertainment, Articles Share:
Former Quad City Times David Burke reporter once referred to the cast of my production of Company as being “the cool kids lunch table” and if he were still reviewing shows in this area, he’d say the same and MORE about this cast. 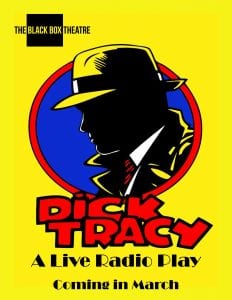 This is the new “cool kids lunch table.”

James Driscoll.
Jenny Winn.
Sara Wegener.
Tom Vaccaro.
Matt Walsh.
Mark Ruebling.
Doug Kutzli.
It’s like producers Lora Adams and David Miller broke into my brain and picked one of my dream team casts and put them on stage for the new Black Box Theater production of “Dick Tracy.”
Unfortunately, they gave this rock star line up THIS script – which is lackluster – that involves world famous detective Dick Tracy who sets out to enjoy a night out at the circus but OF COURSE, murder and mayhem upends his plans. It’s up to Tracy to unravel a thinly veiled mystery (and most likely you’ll figure out well before the renowned sleuth) but what manages to unfold beyond the weak story line is WHY you should go.
Director Lora Adams has wisely set the show in an old timey radio studio and where others would’ve simply had no set, no foley artist (played here by comedic wizard Tom Vaccaro), and little to no staging, Adams – as most of us know – ALWAYS goes big or goes home. Thankful for us she never goes home. In lesser hands, this may have fallen flat but here we see something fun and worthy of your time and your dollars.
As for the cast, well see what I said above and repeat. You can’t really go wrong here.
As Dick Tracy, James Driscoll- one the most fantastic actors we have in this area (one of the few I’m honestly afraid of – in the best way – having been up close and personal to his previous work in A Few Good Men and Who’s Afraid of Virginia Woolf?) – is in top form despite what he’s been given. Along side him is his gal pal Tessa (the ALWAYS extraordinary Jenny Winn), who seems to be a better sleuth than renowned detective and together their chemistry rivals what’s on the page. (Can someone PLEASE find them a project to do together?!)
Advertisement
Surrounding Driscoll and Winn are a merry band of border line stick characters: the aforementioned Tom Vaccaro in a subtle yet effective role as the foley artist (I found myself watching him throughout because he was ALWAYS doing something fun); an extremely subdued, realistic Mark Ruebling as Shill, the Circus owner; the always-on-his-mark Doug Kutzli as the feminine and constantly aghast Vitamin; and Sara Nicole Wegener, who does so much by doing so little (which is a major compliment here), as Faye, the big cat tamer – The Tiger Queen (if you will).

It was Matt Walsh, though, that really stood out. Like he did in Black Box’s Turn of the Screw last summer, Walsh delivers an extremely nuanced yet broad performance as both the Announcer and Duckfoot the Clown. His Duckfoot featured a red nose – on the outside of the shield – and I wanted to applaud that choice on the spot. A clever and subtle choice that in the “before times” would not have elicited such a chuckle. It helps that Walsh is an extremely funny performer, of course, but that little detail really made me smile.

A few quibbles – the choice of The Eye of the Tiger seemed to be an odd anachronistic choice; the Chewy.com cardboard box on the foley table felt extremely out of place; and the recorded commercials would have benefited from being live. Those small details kept me from falling completely into the time period of the piece…
BUT it hardly mattered because I WAS SEEING A SHOW IN PERSON!
How fun is that?!
The minor issues aside, I dig the old timey radio show format and I love that Black Box has found a niche. I hope they continue the tradition of offering them. They are a nice throwback to a bygone era and offer us what we really need right now:
PURE, FUN ENTERTAINMENT.
This piece won’t change the world but I think that’s OK. Some pieces of theatre should just… entertain. And that’s it. I smiled knowing I was in a theatre with real life humans watching people I know and love – my friends – tell a story. I felt safe. I felt secure. I felt HAPPY. If you’ve missed the theatre and want to see it survive, as my good buddy Doug Kutzli says, “Buy a Ticket, See a Show!”
Tonight gave me some small hope that the “after times” are finally FINALLY on their way.
Advertisement

Tristan Tapscott
Tristan Layne Tapscott has been dubbed the “Quad Cities’ P.T. Barnum” and although the person who initially said it meant it as an insult, he happily accepts the title.
See More Articles From Tristan Tapscott
Tagged: Black Box TheaterDick TracyLora Adamstheater reviews