Like many hospitality businesses during the past year, the 113-year-old Quad-Cities institution Lagomarcino’s has had a very hard time since the pandemic. 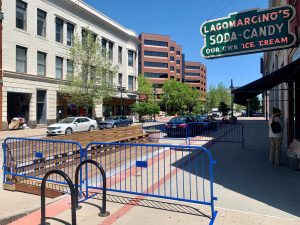 As Wednesday afternoon’s beautiful blue skies blanketed the area, brighter days are ahead with the recent installation of a new parklet outside the ice cream parlor  and confectionary at 1422 5th Ave., Moline.

This is the first such parklet in the Quad-Cities area, said Geoff Manis, Main Street program manager for the City of Moline and Moline Centre. It is defined as “a small seating area or green space created as a public amenity on or alongside a sidewalk, especially in a former roadside parking space.” 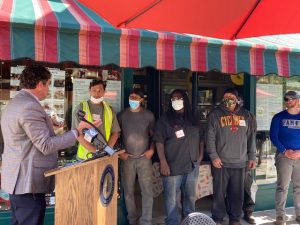 Manis thanked all the Black Hawk College students involved in the project.

Moline Centre partnered with Black Hawk College’s Highway Construction Careers Training Program (HCCTP) to create a one-of-a-kind interpretation of a parklet prototype at Lagomarcino’s — a 24-foot-long wooden bench and platform on the street, hugging the sidewalk.

“Parklets have been proven to stimulate revenues for businesses they complement; increase foot traffic throughout the business district they’re incorporated into; calm traffic, spur new business growth, and create a warm, welcoming, vibrant and safe atmosphere for residents, employees and families as they interact with Main Street districts across America,” Manis said.

Around the country, parklets become “an overnight game-changer” for their business districts, he said. “All this goes without mentioning the heightened demand that the Covid-19 pandemic has created for safe outdoor dining opportunities,” he said.

The city revised outdoor dining rules a year ago in May, and Moline Centre borrowed metal fencing and barriers last year from the TaxSlayer Center for local bars and restaurants to use. Since the Moline arena may need its barriers for its own outdoor events, Manis got new blue barriers for the city, which have been put up at Lagomarcino’s and across the street on 5th Avenue, outside Bent River and Analog Arcade 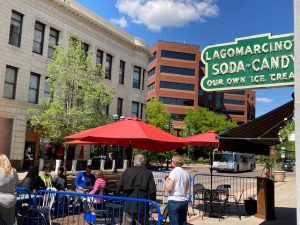 “It’s good as a downtown organization to have crowd control fencing, because my goal is to do big events down here eventually and I’m gonna need that,” he said earlier Wednesday.

Most downtown restaurants did outdoor dining along sidewalks last year, he said, and parklets were discussed at the time.

Manis reached out to a local design firm, which turned out to be too expensive for the city’s purposes, and he then approached the Black Hawk HCCTP, and talked to Paul Fessler, the 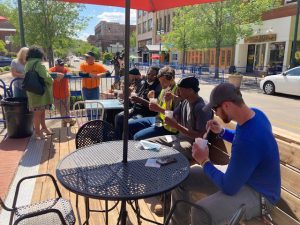 “They only work by the semester, so they only have so much time when they can produce these things,” Manis said. “So, with that arrangement, there were no labor costs whatsoever, just materials, which was great.”

“The HCCTP is undoubtedly one of the most essential and dynamic secondary education workforce programs that you can find anywhere in the Quad-Cities,” he said.

The parklet design they came up with is “structurally sound, aesthetically pleasing, fiscally conservative and a safe approach to parklet design,” Manis said. Eight students involved in the construction “approached the build with a level of enthusiasm and diligence, and professionalism, that far exceeded my expectations,” he added.

Manis gave each of the HCCTP students in attendance Wednesday a magnet made by downtown artist Jon Burns of the parklet they built. “I know all of you have a very bright future,” he told the group. 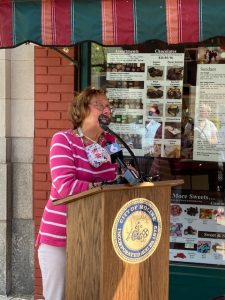 Beth Lagomarcino, co-owner of Lago’s, said she and her family are proud BHC alums.

If other businesses want to add a parklet, they would be responsible to pay for it and get it approved by the city, he said.

“Our goal is to find creative ways within our budget, maybe federal stimulus money that’s available to the city from Covid-19-related safety precautions, to dip into that – to complement these bars and restaurants in downtown Moline that have been hard hit,” Manis said. “It’s been a dire situation.”

Moline Centre paid for Lago’s parklet, to demonstrate the prototype. The city has a request for proposal (RFP) on the city website, seeking bids from area contractors for parklets (due June 16), Manis said. He expects them to resemble what exists at Lago’s.

“It is an opportunity to share with all of you, the opportunity of what could be,” he told Wednesday’s crowd, which included Moline’s new mayor, interim city administrator and some aldermen.

“If implemented, this would be a public/private partnership that will help our hard-hit downtown Moline businesses thrive once again,” Manis said. To contractors, he added: “This is a call to action; please submit your bids.”

There’s not much concern about taking away downtown parking spots, he said earlier.

“We believe people will go a little bit out of their way to have the opportunity to dine in a one-of-a-kind outdoor dining opportunity like that in the Quad-Cities,” he said.

Manis looked at dozens of municipal parklet programs around the country, and modeled his after the one in Milwaukie, Oregon. 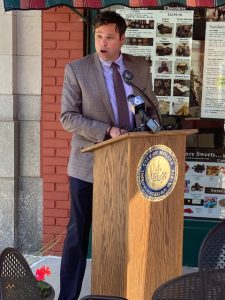 “If we can continue to get this off the ground – or on the ground, if you will – we’ll be one of the only municipalities to do it like this,” he said. Manis set up the other barriers along 5th Avenue over the past week.

The reintroduction of outdoor dining also is perfectly timed as Moline Centre is ready to kick off the Thursday night Bass Street Landing concert series (off 17th Street and River Drive), which will start June 3.

“They’re fabulous,” she said of the new benches, noting removal of a parking space is negligible, since 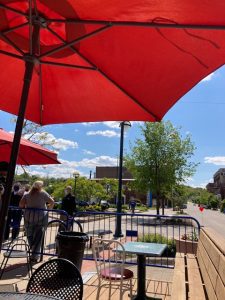 downtown traffic has been cut down so much in the past 14 months.

“It’s been a long, hard year for all of us, but brighter days are ahead,” Lagomarcino said, noting she and her siblings and children all attended Black Hawk College. Lago’s supplied free hot fudge sundaes to all at Wednesday’s event.

The goal is to work collaboratively with the downtown business owners, and the City of Moline to establish 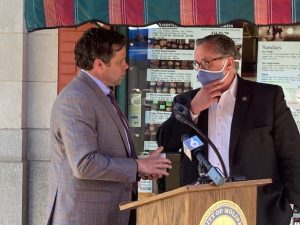 the Q-C region’s first system of parklets in downtown Moline.

Paul Fessler of the HCCTP said his program is funded by the Illinois Department of Transportation, but tries to give students experience in any of the building trades.

“We have people get into plumbing, electrical, sheet metal and different kinds of carpentry,” he said. Dave Parker, a retired carpenter, came up with the Lago’s parklet design, Fessler said.

“Based on what Geoff wanted and what seemed feasible budget-wise and everything, he came up with this design,” he said. The new parklet was made from cedar treated wood, which cost about $2,000.

“We end up doing quite a bit of concrete pads and sidewalks and stuff, so it was really good to have a carpentry project,” Fessler said of his students. “There’s a lot of measurement that goes into this, and a little more precision than some other projects that we do.”

Jonathan Turner
Jonathan Turner has been covering the Quad-Cities arts scene for 25 years, first as a reporter with the Dispatch and Rock Island Argus, and then as a reporter with the Quad City Times. Jonathan is also an accomplished actor and musician who has been seen frequently on local theater stages, including the Bucktown Revue and Black Box Theatre.
See More Articles From Jonathan Turner
Tagged: beth lagomarcinoDowntown MolineGeoff ManisLagomarcino’sMoline Centre