The Miracle at Freight House Continues Through Jan. 24 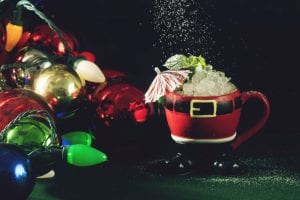 Hanukkah is celebrated over eight nights and Christmas is honored over 12 days, ending today (on Epiphany), Jan. 6. It’s a major miracle that the first Miracle at the Freight House, 421 W. River Drive, Davenport, is being extended four weeks beyond its original end date.

Though the worldwide Miracle pop-up bar franchise is meant to celebrate the Christmas season, who doesn’t need a miracle year-round?

That’s exactly what Davenport co-owner Lars Rehnberg heard from customers who filled the temporary, but fully festive bar – as much as was allowed under state Covid restrictions.

“We limited to 40 seats, and had a lot of nights where it was full,” he said Tuesday, noting for the last six weeks of 2020, they were open seven nights a week. “We only had to turn people away on Friday and Saturday nights, which led us to extending the Miracle season. We had to hold the capacity rule to keep everyone safe, so sometimes we had to turn parties away, or get people in for limited timeframes.”

Originally planned to end with their New Year’s Eve (which closed about 1 a.m.), the Miracle is open the first four weekends of January — Friday from 3 p.m. to midnight, Saturday 1 p.m. to midnight, and Sunday 2 p.m. to 8 p.m., with the last night on Jan. 24. 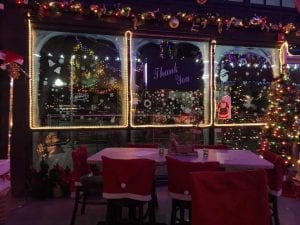 The interior of Miracle at the Freight House, 421 W. River Drive, Davenport.

“Every weekend, and the week between Christmas and New Year’s was the peak for sure,” said Rehnberg (who runs the business with his wife Karah, and Ethan Bailey of Davenport, national sales director for Cocktail Kingdom, the Miracle parent company).

“We definitely learned the Quad-Cities has a rhythm — weekends are peak times,” he said of why they didn’t want to extend to weeknights in January, “We felt our staff needed a break, we needed a break. It was a big season. It was exhausting. We found a compromise, tried to let folks who wanted to experience it, get a chance to experience it.”

The first Miracle location in Iowa is in the 2,400-square-foot space next to the Front Street Taproom, formerly occupied by Fresh Deli, which closed in late October 2019.

Based in New York City, Cocktail Kingdom makes high-end barware – including shakers, spoons, strainers – for bartenders and mixologists. Miracle is their holiday pop-up project, and Bailey has been wanting to do it in Davenport.

The concept was born in 2014 in New York, when upon the advice of his mother, owner Greg Boehm decided to halt construction of what was to be his new East Village cocktail bar called Mace and transformed the unfinished space into a pop-up bar serving holiday-themed drinks among over-the-top Christmas decorations.

As crowds swarmed the NYC location, Boehm’s friends throughout the bar industry asked how they could recreate the holiday magic on their own turf and expansion became inevitable. The following year, Miracle expanded to four locations and in 2016, it went worldwide with pop-ups in Greece, Montreal and Paris. 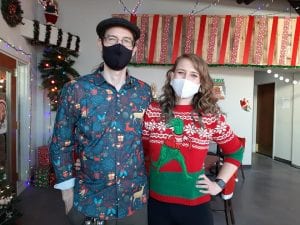 There are now 118 Miracles in 35 states and seven countries – the closest to the Quad-Cities is in Madison, Wis.

The 10 Miracle-branded recipes take a lot of work to get the cocktails right, Rehnberg said. The most popular here (and nationwide) has been the Christmapolitan — Vodka, Elderflower, Dry Vermouth, Spiced Cranberry Sauce, Rosemary, Lime, and Absinthe Mist.

“There are 10 cocktails and we wanted all 10 to just be devastatingly good,” he said in November. “There can’t be any decent cocktails; they all have to be great cocktails. That was a really fun process.”

Other Miracle locations are run by people who own their bar year-round and put Miracle on top of it for the holidays, Rehnberg said. “They integrate it into an existing establishment. Of course, we don’t own a bar, so we had to pop it up from scratch. Which is a lot more work. We had to get our own liquor license, and our own everything.”

The city (which owns the Freight House complex) replaced the air filter and the business also added more air filtration systems, and does regular sanitizing, among increased cleaning protocols. “We’re trying to do everything we can to safely add some cheer to this year,” he said.

Customers are required to wear masks unless they’re seated at their table. All staff (typically six working at a time) wear masks, have strict hand-washing requirements, and cannot work if they have any symptoms; temperature is taken at beginning of every shift, Rehnberg said. 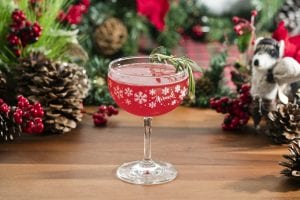 The most popular cocktail is the Christmapolitan, made with vodka, elderflower, dry vermouth, spiced cranberry sauce, rosemary, lime and absinthe mist.

The bar is limited to 50 percent capacity, with tables spaced six feet apart.

The next most popular cocktails have been the Snowball Old-Fashioned (a whiskey lover’s drink), and the Yippie-Ki-Yay Mother F****r! The latter is made with a blend of four rums, pumpkin-almond orgeat, lime and Angostura bitters.

Given the devastating year that was 2020, the Miracle New Year’s Eve atmosphere was pretty electric, Rehnberg said. “The cry that went up at midnight was really something,” he said.

It’s unusual for a Miracle pop-up to stay open past New Year’s, but Davenport got approved by corporate in New York, as they did for some others, he said.

“Several locations had lockdowns at their peak season, like Vancouver, British Columbia — literally after one day of business, and they had to lock down,” Rehnberg said.

He’s very glad Miracle didn’t decide to open in the Illinois Q-C, since the state of Illinois closed indoor bar and dining service in November.

Since Christmas is over, they are keeping decorations up, but the recorded music will blend in non-holiday songs, and they’re adding some classic American cocktails to the menu – including the Old-Fashioned, martini, daiquiri, and some underappreciated American cocktails, Rehnberg said. 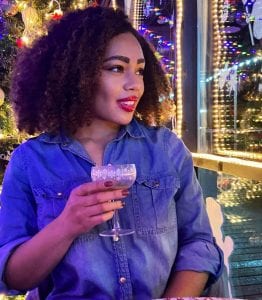 Mikhayla Hughes-Shaw enjoys a drink at Miracle at the Freight House.

Miracle also sells sealed to-go cocktails – with a cocktail mix, including ice, bitters and garnish. They include an instruction manual for each, for customers to mix the cocktails at home. The orders have liquor in a plastic bottle with a tamper-resistant lid, and each mix sells for $13 or $14.

“There’s also for each cocktail, a custom mug or glass that it goes with, so we’re selling that at retail,” Rehnberg said.

The owners also hope to work with Davenport’s Riverfront Improvement Commission, on plans to open a year-round farm-to-table restaurant there, with rotating menus, to complement the Freight House Farmers Market.

“If that comes to fruition, we’d love to be a part of that, and design a cocktail menu around that, that matches whatever the current menu is in the farm-to-table space,” Rehnberg said.

For more information, reservations, and to see the cocktail menu, visit www.miracleqc.com.

To see a short video clip of customers at Miracle at the Freight House, click HERE —
https://drive.google.com/drive/folders/1-NiiWUhvEQgcE-5ogUgmiyhvRjCJcWiV
Advertisement

Jonathan Turner
Jonathan Turner has been covering the Quad-Cities arts scene for 25 years, first as a reporter with the Dispatch and Rock Island Argus, and then as a reporter with the Quad City Times. Jonathan is also an accomplished actor and musician who has been seen frequently on local theater stages, including the Bucktown Revue and Black Box Theatre.
See More Articles From Jonathan Turner
Tagged: cocktailsDavenportdrinksFreight Housekarah rehnberglars rehnbergmiracle