Midwest Monster Fest 2020 is proud to welcome Chaney Morrow to their September 5th and 6th event at The Rust Belt in East Moline, Illinois!

Chaney Morrow played Ghost in the 2019 film Haunt written and directed by Scott Beck and Bryan Woods (writers of A Quiet Place) and produced by Eli Roth. He also played a young farmer in the 2019 film Dark Waters that starred Mark Ruffalo, Anne Hathaway, Tim Robbins and Bill Pullman. 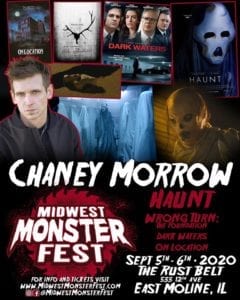 Chaney has 2 films coming out in 2020 Wrong Turn: The Foundation and On Location which both films also star Haunt actor Damian Maffei (Devil). Chaney has two children with fiance Shannon Rieder. He also has a love for music and has been a drummer for 20 years with 2 bands Saint Cycle and Back To The Machine Gun.

Make sure to check out Haunt currently streaming on Shudder or rent or purchase on Amazon Prime!

Get your tickets now at www.midwestmonsterfest.com

Sean Leary
Sean Leary is an author, director, artist, musician, producer and entrepreneur who has been writing professionally since debuting at age 11 in the pages of the Comics Buyers Guide. An honors graduate of the University of Southern California masters program, he has written over 50 books including the best-sellers The Arimathean, Every Number is Lucky to Someone and We Are All Characters.
See More Articles From Sean Leary
Tagged: Bryan Woodschaney morrowHauntMidwest Monster FestRust BeltScott Beck