A long-standing hallmark of the Western Illinois University Physics Department has been the commitment of faculty to provide one-on-one research experiences to both graduate and undergraduate students. The efforts of the faculty in mentoring and professional development of students extends beyond graduation, as exemplified by the recent research accomplishments of the Astrophysics Research Laboratory.

WIU Physics Professor Esteban Araya, lead of the laboratory, said most scientific projects in physics take many years of research to complete, 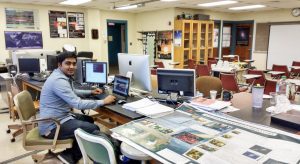 WIU alumnus Onic Shuvo is pictured at the WIU Astrophysics Research Laboratory. Mentorship of Shuvo continued after his graduation, resulting in the scientific article “Thermal Formaldehyde Emission in NGC 7538 IRS 1,” published this past June. Shuvo is now a Ph.D. student in Astrophysics at George Mason University, Virginia.

and typically a project extends well beyond the time a student is at WIU.

Onic Shuvo (MS in Physics, 2017), started a project under Araya’s supervision when he came to WIU in 2015. While at WIU, Shuvo completed key aspects of the project and presented them at the 2016 American Physical Society Prairie Section Meeting, where he received the best poster award. After graduating from WIU, Shuvo now continues doctoral studies in the area of astrophysics at George Mason University in Virginia, while also working with Araya on his WIU project. Under the mentorship of Araya, Shuvo published the results of his WIU research this summer in the prestigious scientific journal Monthly Notices of the Royal Astronomical Society.

The article is based on observations conducted with the Green Bank Telescope in West Virginia, one of the largest single-dish radio telescopes in the world. The article reports a study of the nature of radiation from an organic molecule, formaldehyde, in a region where huge stars (far more massive than our Sun) are forming. The publication of this article, with Shuvo as first author with a double affiliation (WIU and George Mason University) is a major achievement in his professional career, with this being his first peer-reviewed scientific publication.

“Publishing a paper is always exciting, and if you are the lead author of that paper then it’s beyond exhilarating,” said Shuvo. “I got the opportunity to continue working with Dr. Araya and one of my best friends, who is also a WIU Physics alumnus, on my project that I started during my MS in Physics program at WIU. We not only finished the paper; we also went through the experiences of how a peer-reviewed publication process works. It was my first peer-reviewed publication in a renowned astronomy journal. The collaboration helped me understand the importance of working together and the experiences I gained are now coming in very handy in my current Ph.D. study.” 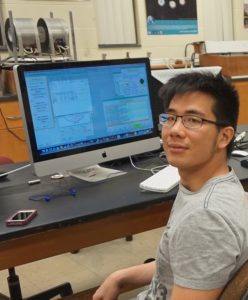 WIU alumnus Onic Shuvo is pictured at the WIU Astrophysics Research Laboratory. Mentorship of Shuvo continued after his graduation, resulting in the scientific article “Thermal Formaldehyde Emission in NGC 7538 IRS 1,” published this past June. Shuvo is now a Ph.D. student in Astrophysics at George Mason University, Virginia.

A co-author on the article, Wei Siang Tan (MS program in Physics, 2017) also continues active collaboration with Araya, as he not only participated in the data analysis presented in Shuvo’s article but is working with Araya on a follow-up project of his WIU master’s thesis.

“In September 2020, we published an article based on Wei’s master’s thesis,” said Araya. “The success of his project motivated us to apply for additional observing time at the Very Large Array Telescope in New Mexico to further investigate the nature of molecular detections reported in his article. Since Wei graduated, we have been meeting often to work on these observations, which we expect will result in another scientific publication soon.”

Physics Chair Kishor Kapale said the mentorship of students after graduating from WIU is a long-standing tradition of the Department of Physics.

“In the last five to six years alone we have had more than 15 undergraduate and graduate students from all research labs of the department, such as material science, quantum information and astronomy, who continued to participate in research activities of the department after graduation and were co-authors on research publications” said Kapale. “The mentorship of students after graduating from WIU continues, highlighting the commitment of Physics department faculty to the professional growth of our students.”

The WIU Astrophysics Research Laboratory is supported by a grant from the National Science Foundation (AST-1814063 in collaboration with AST-1814011), and computational resources made possible through generous donations by WIU Distinguished Alumnus Frank Rodeffer.

For more information about the WIU Department of Physics, visit wiu.edu/cas/physics/.

Sean Leary
Sean Leary is an author, director, artist, musician, producer and entrepreneur who has been writing professionally since debuting at age 11 in the pages of the Comics Buyers Guide. An honors graduate of the University of Southern California masters program, he has written over 50 books including the best-sellers The Arimathean, Every Number is Lucky to Someone and We Are All Characters.
See More Articles From Sean Leary
Tagged: Western Illinois Universitywestern illinois university physics programWIU