Dave Pszenyczny, the inaugural head coach of the new Quad City Storm, will be in the community this weekend at two separate events in Davenport and Bettendorf, Iowa. 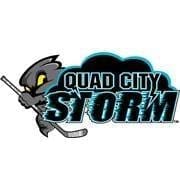 On Friday, July 7 and Saturday, July 8, Coach Dave Pszenyczny will be at the QC DekHockey tournament at Bettendorf’s Crow Creek Park for the QC DekHockey National Tournament. The tournament features over 60 teams from Canada, Louisiana, Wisconsin, Michigan and the Midwest Region competing for over $12,000 in cash and prizes.

Coach Chezy will be at the Quad City Storm Booth Friday afternoon from 3:00pm until 7:00pm and on Saturday from 10:00am until 2:00pm. In addition to meeting the Coach, you can also register for a myriad of prizes and talk to one our representatives about becoming a season ticket holder and enrolling your child in our Kid’s Club!

On Sunday, July 8, Pszenyczny will team up with 6 instructors from Planet Hockey at River’s Edge in downtown Davenport., Planet Hockey is an organization in its 24th year of traveling the globe expanding hockey possibilities and providing world class camps, team and youth association training. Featured Planet Hockey staff will include: Camp Director Josef Huber, a retired professional player from Germany; Head coach of the Sherwood Park Kings Annette Jensen of Calgary, Alberta; Austrian professional player Jeemu Juppala of Finland; Goaltending coach Bret Gilmour, a consultant with Junior teams in the U.S. and Canada; Referee and professional player Petr Sedlak or the Czech Republic; and top junior player Ondrej Koudela of the Czech Republic.

Quad City Storm co-owner Ryan Mosley said, “Coach Chezy is excited to get out in the community with future pros from the Quad City area. And we can’t wait to show off what he’s capable of.”

Sean Leary
Sean Leary is an author, director, artist, musician, producer and entrepreneur who has been writing professionally since debuting at age 11 in the pages of the Comics Buyers Guide. An honors graduate of the University of Southern California masters program, he has written over 50 books including the best-sellers The Arimathean, Every Number is Lucky to Someone and We Are All Characters.
See More Articles From Sean Leary
Tagged: BettendorfDave PszenycznyhockeyPatrick LevequeQC DekHockeyQuad City Storm