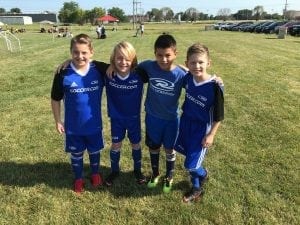 The jerseys and team name may have changed, but the result was still the same – and the color of the medals walking away remained gold.

Featuring four players from the top-rated Mid America Premier team which disbanded over the summer, the QC Rush began its inaugural season in the U11 division with a commanding win of the 3 v 3 Freeport Cup over the weekend, logging four big victories, including a “slaughter rule” demolishing in the title game.

Taking the field for the new Moline-based Rush, affiliated with the national organization of the same name, were former MAPS players Elijah DeLaCruz, Jackson Leary, Jonas Cortez and Connor Wehr. They started off a bit rusty in the first game, trading goals in the initial debut through the first half, en route to a 3-3 tie at half, but in the second half, Rush exerted their dominance, as Jackson Leary and Elijah DeLaCruz each scored a pair of goals and Jonas Cortez added a third to blow up an 8-5 win.

The second game was just the opposite, as Rush looked fantastic, moving the ball and defending 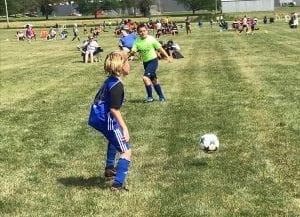 brilliantly in a game that they dominated, despite the score of 5-2 on the win. The game was never as close as the score, as Rush was up 4-0 and easily outshooting the opposition, despite the bad luck of many of the shots just missing the tiny 3v3 goals. The opposition picked up two goals late to take off the edge, but it was Rush exerting its will throughout.

The semi-final was a combination of the first two, as the Rush peppered the opposition with shots but couldn’t get them to go in the net. A few breakaways by the opposition and the score was 2-2 at the half despite Rush controlling possession and largely looking like the better team. That quality shined through in half two, as DeLaCruz, Leary and Wehr all scored while Cortez joined them to shut down the opposition and head into the finals. 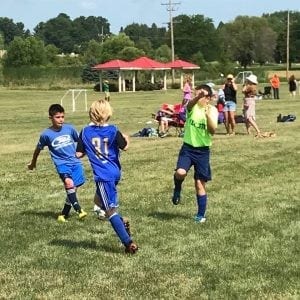 Prior to the final game, the referee instructed the coaches on protocol in regard to a tie at the end of regulation, saying that the game would go into two overtime periods and then a shootout, but he may as well have saved his breath. The game was never close, as Rush ripped out of the gates, blowing out to a 6-0 lead that instigated the tournament’s “slaughter rule,” allowing the other team to add a player from the bench so that they were playing four to the Rush’s three. Even with that advantage, the Rush still controlled the game and easily cruised to a 9-2 win, taking the gold and starting off their season right, as part of a new organization, but still with the same commitment to winning and quality soccer.

The U11 Rush will continue play with a demanding schedule over the fall which will include tournament treks to Milwaukee and St. Louis to play the top teams in the Midwest, as well as stops at various tournaments in Wisconsin, Iowa and Illinois. 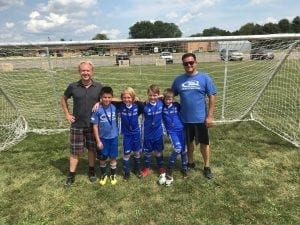 Sean Leary
Sean Leary is an author, director, artist, musician, producer and entrepreneur who has been writing professionally since debuting at age 11 in the pages of the Comics Buyers Guide. An honors graduate of the University of Southern California masters program, he has written over 50 books including the best-sellers The Arimathean, Every Number is Lucky to Someone and We Are All Characters.
See More Articles From Sean Leary
Tagged: Connor WehrElijah DeLaCruzJackson LearyJason DeLaCruzJonas CortezMid America PremierQC RushQuad-Cities soccerSean LearyU11 soccer