Hairbangers Ball and Corporate Rock Heading to The District!

Grab your spandex and start teasing your hair now! Hairbangers Ball is heading to the Quad Cities! 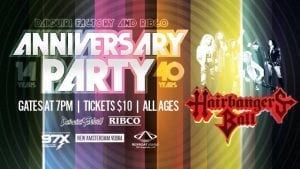 Tickets for this all ages show are $10 and can be purchased online at https://www.ticketweb.com/t3/sale/SaleEventDetail?eventId=8328245&dispatch=loadSelectionData. The first 300 people through the gates will receive a free Anniversary Koozie!

Hairbanger’s Ball was established out of Chicago in 2001. What started off as a “What If” idea quickly turned this band into one of the most sought after “80’s Hair Rock Tribute Bands” in the United States. Performing over 150 shows a year for 15 years says it all. Their show is in high demand for club venues, private parties, and corporate events. This band has even been named “Best Rock Band” by the public in their hometown of Chicago.

Quad Cities’ own, Corporate Rock, brings a little bit of everything to the stage. Playing hits from the 60’s, 70’s, 80’s, 90’s, 00’s and New Country, there’s something for everyone to enjoy! Band members Brad Benny (guitar/vocals), CJ Cervantes (drums/vocals) and Ian Farmer (bass) will guarantee you have a good time.

Corporate Rock was founded by Brad Brenny in 1996. This 3-piece power rock trio has played over 1 million shows at nearly every venue in Eastern Iowa/Western Illinois. The band opened for Ted Nugent in 2002 and currently plays with some of the best regional bands. Brad Brenny went to Musicians Institute in Hollywood California for the Guitar Institute of Technology programs from 2003-2004. C.J. Cervantes has music in his DNA and is the driving force behind the band. Bill Bryant keeps the low-end thumping on the bass guitar!

Do not miss the party of the year this weekend, in the District of Rock Island!

Tess Abney
Tess Abney was born and raised in the Quad Cities. Her passion for writing and entertainment was apparent at a very young age. Whether it is sharing local events and businesses with readers or sharing her thoughts on life, she finds comfort in the way words can bring people together.
See More Articles From Tess Abney
Tagged: Anniversary PartyCorporate RockDaiquiri FactoryDistrict of Rock IslandHairbangers BallQuad CitiesRIBCO