Genesius Guild Kicks Off Theater In Lincoln Park This Weekend

It’s not summer without Genesius Guild, and the venerable local theater company begins its latest round of theater in the park shows this weekend after debuting its performance schedule with Ballet Quad Cities’ Ballet Under the Stars in Rock Island’s Lincoln Park last weekend.

The 2018 summer series includes nineteen performances of five productions, including ballet, Shakespeare, and classic Greek drama. All performances are offered free of charge in Lincoln Park, Rock Island. It is the only community program of its kind in the country (www.genesius.org). 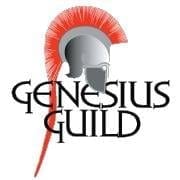 Shakespeare: “As You Like It”.  A comedy about love, exile, forgiveness, and gender reversals.  Many of its best lines became part of our common language, e.g., “too much of a good thing.”

Aeschylus:  “Prometheus Bound”.  The play explores the conflict of force and justice. Prometheus is chained perpetually to a mountain for bringing fire to mankind.

Shakespeare:  “The Merchant of Venice”.  One of Shakespeare’s most controversial plays examines tolerance, mercy, and human nature.  A merchant guarantees a loan with a pound of his own flesh.  When he doesn’t pay, the lender demands the guarantee.  He is saved by his friend’s cross-dressing fiancée.

Aristophanes:  “Thesmophoriasuzae”.  Also called the Poet and the Women, the comedy plot revolves around women subverting male dominance.  As always, the jokes are completely updated to be funny today.

Shakespeare: The Merchant of Venice

Sean Leary
Sean Leary is an author, director, artist, musician, producer and entrepreneur who has been writing professionally since debuting at age 11 in the pages of the Comics Buyers Guide. An honors graduate of the University of Southern California masters program, he has written over 50 books including the best-sellers The Arimathean, Every Number is Lucky to Someone and We Are All Characters.
See More Articles From Sean Leary
Tagged: Don WootenGenesius GuildLincoln Parklocal theaterRock IslandShakespeare