Kortney Gaura and her daughter were really looking forward to swimming with the pigs. 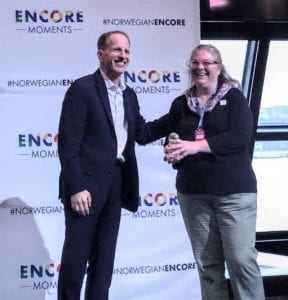 A co-owner of K&K Hardware in Bettendorf with a heart of gold, Gaura was among 2019 winners of Norwegian Cruise Line’s (NCL) Encore Moments campaign. The 51 winners nationwide (Gaura was honored for the state of Iowa) were feted in New York City in December 2019, an initiative to recognize and reward everyday heroes across the U.S. and Canada for the positive impact they have on those around them.

The winners, who were nominated for their selfless efforts, were treated to an afternoon appreciation event and award ceremony aboard Norwegian Bliss, the company’s newest ship to sail from New York City with seven-day cruises to Bahamas and Florida and 14-day voyages to the Caribbean. The nominees enjoyed a preview of the experiences available across NCL’s 17-ship fleet, and were to be rewarded with a free cruise for two.

Of course, Covid-19 scrapped those plans in 2020, and Gaura worked with NCL a number of times to re-book their future cruise to the Bahamas for herself and daughter Josie, who just turned 14 on April 3.

The entire cruise industry has been on hold during the pandemic, and Gaura had hard time even getting a refund for the shore excursions and soda packages she bought – including a unique “swim with the pigs,” off of NCL’s private island, Great Stirrup Cay, in the Bahamas. 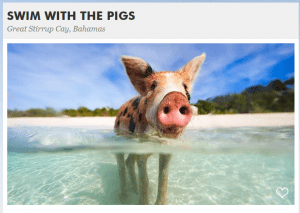 Norwegian offers swimming with the pigs, off their private island in the Bahamas.

Just last week, she did get an email from NCL saying they would process the refund.

“It’s disappointing to have the cruise canceled for my daughter,” Gaura said Saturday. “It was understandable overall. I was more just disappointed in how Norwegian handled it. Not even the canceling of the cruise…Sometimes, the notice of canceling was very short before when people had cruises planned.

“Then to keep people’s money, not just mine,” she said. “I’ve heard of people who paid a lot

The Encore Moments winners got to have an award ceremony aboard the Norwegian Bliss, docked in New York City.

more than me. On one hand, I get it – they’re a business and they don’t have a lot of money coming in. On the other hand, they don’t think people can get their money back for something they can’t use?”

Originally, NCL wouldn’t offer refunds since she accepted a credit for a future cruise, then they decided to extend the cruise certificate and if Gaura wanted her money back, she had to forgo the future cruise.

The credit for the future cruise, originally was going to be good until June 2021, then December, and she stopped keeping track since she sought her refund.

Gaura planned to go on her free three-to-five-day cruise for two on a Norwegian ship last summer, noting they weren’t actually scheduled to go on the Encore for the trip.

“We had a feeling before Norwegian actually announced it,” she said of the cancellation. “I could completely understand why they were being 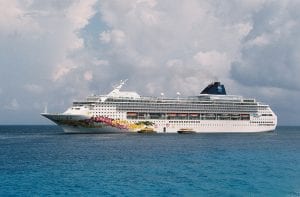 They re-booked the cruise a few times, and Gaura thought it would be going on the Norwegian Sky, leaving from Florida.

She and her family are planning a vacation to Virginia Beach in July. They went to the Florida Keys last summer for a week.

She wasn’t worried about flying then. “There’s always a worry in the back of your mind, but I had packages of Clorox wipes; we had our hand sanitizer and our masks,” Gaura said. 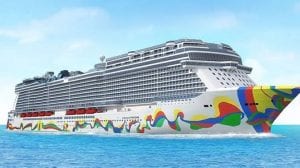 “After boarding a speedboat, you’re quickly whisked away to Treasure Island, a small speck of land within eyesight of Norwegian’s private island,” according to NCL’s description of the excursion.

“After disembarking, you’re taken up to an expansive wooden deck, complete with ample tables & seating, for an introduction and safety briefing. Although the pigs are as gentle as they are cute, they still require a sufficient level of awareness and respect from visitors,” the NCL site says. “Hard pig hoofs and soft human toes don’t mix! Visitors also learn a little about the pigs themselves. Did you know that pigs are smarter than dogs?”

Gaura also had booked a cabana in the Bahamas as part of the planned NCL excursion. Her family previously took a Disney cruise to the Bahamas about four years ago. She and her husband Chris also have a 15-year-old son, Grant.

At nearly 1,100 feet long, with a gross tonnage of almost 170,000, Norwegian Encore has a guest capacity of nearly 4,000. She was the fourth and final ship of the very successful Breakaway Plus class, and features many of the highly rated restaurants and lounges that have made this class one of the most innovative in the company’s history.

A surprise award and Christmas-themed trip

Gaura, a 40-year-old Pleasant Valley High grad, has worked continually at the downtown Bettendorf institution for 25 years. For many years, she’s been on the store’s donation committee, which has $8,000 to give out a year. She also does hiring at the store, which traditionally

Her husband nominated her for Encore Moments, because of her commitment to volunteering in the area.

“She makes it a priority to give back wherever she can,” Chris wrote in 2019. “She is a small-business owner that prioritizes donating to charity, supports local youth teams, and gives 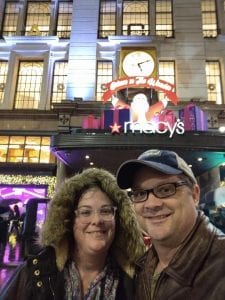 Gaura and her husband Chris at Macy’s in Manhattan in December 2019.

donations for fundraisers. Outside of work, she volunteers her time with Habitat for Humanity, is a trained volunteer at the local Humane Society, does mock job interviews with local high school students, as well as helping other community nonprofit agencies as she can.

“But it’s her relationship through Big Brothers Big Sisters that is highly valued by her,” Chris wrote. “Kortney’s ‘Little’ had been nominated to the program because she sought extra attention from adults and not always in good ways. Kortney’s one-on-one attention over the past years helped her Little blossom. … She says she is not changing the world. I say she has changed the world for one little girl.”

“I don’t participate in Big Brothers Big Sisters for the recognition,” Gaura said. “Appreciation for what I have done is nice. Working with others to be part of a solution is even nicer. As a small-business owner who works closely with several nonprofit organizations, I saw the need to do more than just donate. I wanted to work directly with individuals and make a positive impact in my community.

“When I first met her, she was regularly seeking extra attention by causing distractions in the classroom, and needing frequent redirection,” she said of her Little, who’s now in 6th grade, learning from her Davenport home.

“We worked on classroom and study strategies over the past two years,” Kortney said in December 2019. “Now she’s a more focused student with a positive attitude. Teachers have told me they can see the difference our time together makes with her. I am proud of the impact our weekly meetings has made in her as a student and a person. … It might be a small step to others, but it’s a huge step for us.”

Gaura is still in contact with her “Little,” but her mom said they aren’t comfortable with in-person meetings yet. “Just a few days ago, I had a 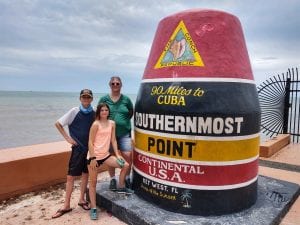 Kortney Gaura vacationed in Key West, Florida in summer 2020, with her kids Josie and Grant.

text conversation and when it warms up, she’s OK with me bringing lunch to their house and meeting outside. I’m not so patiently waiting for that.”

Gaura has been a mentor with BBBS three years, and volunteering for her other places hasn’t restarted yet either, she said.

She and her husband did enjoy their all-expenses paid weekend in New York in December 2019.

“It was really nice; they showed us around the ship,” Gaura said. “That’s probably where I got to meet the most other winners. There are a couple people from that I still stay in contact with on 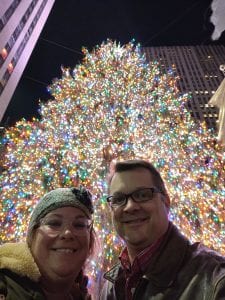 Gaura and her husband Chris at the Rockefeller Center Christmas tree in December 2019, courtesy of an all-expenses paid trip from Norwegian Cruise Line.

They had a really good time, including seeing the Christmas tree all lit up at Rockefeller Center.

“It was honestly very humbling,” she said of being among the winners. One couple started a program like “Make a Wish” for young adults age 18-25. “It was humbling and heartwarming to see actually how many people genuinely care about other people and are doing what they can to help out.”

“I’m not out there creating a new organization or anything,” Gaura said. “I’m just out there trying to help my little community.”

Working during the pandemic

K&K (at 18th and Grant streets), as a hardware store, was deemed an essential business, so they stayed open last March and it was crazy busy, Gaura said.

“So much changed,” she said. “We had online sales before, and those increased a bunch. Phone-in orders increased a bunch, and cleaning and safety protocols. It’s so weird, with customer service, you used to be right next to your customer helping, and I was just telling one of my co-workers – it’s going to be a long time once things get back to normal when I can be close to people. 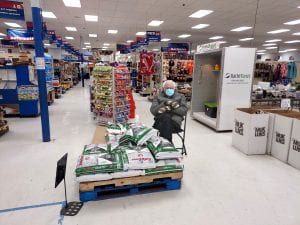 “It’s like this is your new normal of standing six feet away, talking to them,” Gaura said. They had a few people who disagreed with wearing masks, but it’s gone pretty smoothly overall.

K&K usually did deliveries for large items in the past, and they didn’t increase too much, but curbside pickup increased a lot, she said.

At K&K, her work hours have increased in the past year, and at the start of Covid times, Gaura was nervous about health concerns.

Of course, it was scary. I did what I could to be safe – wear my mask, wash my hands,” she said. “My hands are so dry from washing my hands all the time. Try to maintain the distance from people. But on the other hand, people needed to buy hand sanitizer and cleaning supplies we could get.”

“You could only live in fear so much,” she said. “Honestly, when I go to our Easter celebrations this weekend, something could happen too, but is that going to stop me from going?” she said Saturday of meeting with family for the holiday. “You learn to live with it.”

Now life is back to semi-normal. Her kids are back to school in person; her son at Pleasant Valley High, and daughter at PV Junior High.

Jonathan Turner
Jonathan Turner has been covering the Quad-Cities arts scene for 25 years, first as a reporter with the Dispatch and Rock Island Argus, and then as a reporter with the Quad City Times. Jonathan is also an accomplished actor and musician who has been seen frequently on local theater stages, including the Bucktown Revue and Black Box Theatre.
See More Articles From Jonathan Turner
Tagged: bahamascruise linesflorida keysgreat stirrup cayjosie gourak&k hardwarekourtney gouranorwegian cruise linesswimming with the pigsvirginia beach