Grammy-winning musician Jason Mraz will re-release his first ever album, Live & Acoustic, this fall in honor of its 20th anniversary. Released in 2001, the album encapsulates Mraz’s early but formative days performing in the San Diego coffee shop scene.  Live & Acoustic (20th Anniversary Edition) will include two previously unreleased bonus tracks and will be offered on vinyl for the first time.  A vinyl pre-order starts today at Mraz’s site, and the album will be available at all DSPs on November 5. 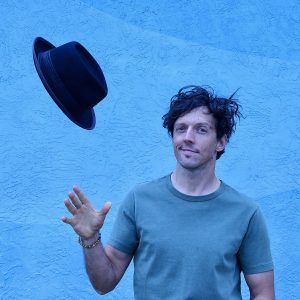 To celebrate the album’s anniversary, Mraz will hit the road with longtime collaborator Toca Rivera, who has performed with Mraz since his coffee shop days.  The trek kicks off November 26 in Mraz’s first home state of Virginia, and winds its way from coast to coast, concluding in Riverside, CA on December 22.

Said Mraz, “Live & Acoustic celebrates the poetry, harmony, and humor that became the foundation for my entire career. It’s not only fun to replay and reimagine that material; I believe it’s important to remember and honor where we came from and how we got here. Add to it our buddy from the coffee shop days, Gregory Page, whose most recent album earned the highest praise at the 2021 San Diego Music Awards, and it’s sure to be a wonderful night of music and laughter.”

Mraz recently completed his “Look For The Good Live!” tour, where he performed across the US with a 13-piece reggae band showcasing songs from his latest album, Look For The Good.  In July he released a deluxe edition of that album which featured three new songs, including “Be Where Your Feet Are.”  Mraz performed the song a few weeks ago on “Today With Hoda and Jenna,” and the official video for the song is available here.

Sean Leary
Sean Leary is an author, director, artist, musician, producer and entrepreneur who has been writing professionally since debuting at age 11 in the pages of the Comics Buyers Guide. An honors graduate of the University of Southern California masters program, he has written over 50 books including the best-sellers The Arimathean, Every Number is Lucky to Someone and We Are All Characters.
See More Articles From Sean Leary
Tagged: Adler Theaterjason mraztoca rivera