Home › Cities › Walcott › Iowans Are Smarter Than ‘Covid Kim,’ And They’re Proving It

Iowans Are Smarter Than ‘Covid Kim,’ And They’re Proving It

Yesterday, I wrote about the moronic decision by Iowa Governor Kim Reynolds to do away with her already minimal efforts to mitigate covid-19 — just as statistics were showing that Iowa is one of the worst, and least safe, states in the country in regard to keeping its citizens covid-free.

I’d say her actions were ill-advised, but apparently, Reynolds took no advice in regard to making them. She ignored scientists, healthcare professionals (you know, those people she loves to pose for photo ops with, and hollowly praise as “heroes” while undercutting them with her actions) and any reasonable advisors, all of whom would’ve told her to keep the mitigations in place, or augment them, especially since Iowa 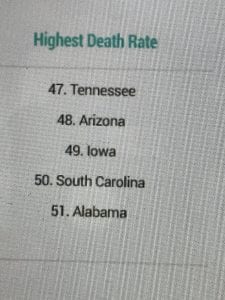 Iowa is 49th (next to last) in highest death rate from covid-19. (The data also included Washington D.C., which is not yet an official state, hence the 51 list.)

was going into a dangerous period, with the new, more virulent strain of covid being found in the state.

Thankfully, an informal survey of me driving around to more than three dozen area businesses today, and looking over various Iowa businesses’ social media pages, displays a glaring fact that’s both inspiring and pathetic.

Every single place I’ve gone to today — and this is completely anecdotal and shouldn’t be taken as a scientific study, merely an extrapolation of personal experience — is still requiring masks, is still practicing some form of social distancing and precautionary modifications to ameliorate any risk to customers and patrons.

From restaurants to automotive repair spots to big box stores to smaller local businesses, everywhere I went continued to ask for patrons to be masked. Everywhere I went had some form of modification to accommodate and consider covid-19 and to help protect patrons.

And on social media, businesses from The Book Rack to the German American Heritage Center and more have posted that they will continue to engage in safe practices in consideration of their patrons.

It’s inspiring in many ways to see people behave in a smart, considerate and responsible manner. And quite frankly, when you look at what they’re asking, it’s really not much. 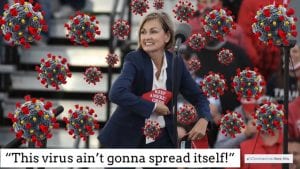 Use hand sanitizer provided by the businesses.

And yet when you look at how rather simple those instructions are, when you consider they’re really a relatively minor inconvenience, it puts Reynolds’ gutless and brainless actions into more sharper relief.

It also makes you wonder who Reynolds is actually representing, and whose interests she’s serving, because it certainly doesn’t seem to be those of the citizens of Iowa.

Because Iowans are better than Kim Reynolds.

Politicians need to start remembering that when they’re elected they cease being only politicians — people playing political games — and that they, through the result of that vote, become representatives. That is, they’ve been elected, they’ve been given a job, to REPRESENT their 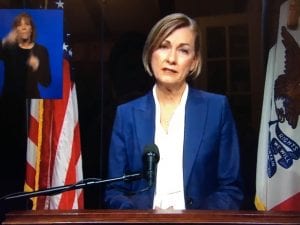 constituents. They are there, they have been hired through the democratic process, to REPRESENT the best interests of the constituents.

In their position, they are given the advantage of a far wider array of tools and informational avenues than the vast majority of those constituents. It is their responsibility to best utilize those advantages. Read the information. Consider it. Make the best decisions for your public, the people you represent, based upon that.

Kim Reynolds has not done that in this case.

And this case is a pretty big one.

Kim Reynolds has abdicated her responsibility and not done her job, and in this case, her incompetence could literally be a case of life or death.

Thankfully, Iowans are much smarter than Kim Reynolds.

Thankfully, Iowans are much more responsible than Kim Reynolds.

It’s heartening and inspiring to see, and I commend Iowa businesses and Iowans for caring enough for their fellow citizens to engage in considerate and responsible action.

It’s sad the person elected to ostensibly represent them isn’t on their same level.

One hopes that when it’s time to vote for governor next time, Iowans remember this, and regardless of political party, they elect someone who represents them, and their interests, much better.

Sean Leary
Sean Leary is an author, director, artist, musician, producer and entrepreneur who has been writing professionally since debuting at age 11 in the pages of the Comics Buyers Guide. An honors graduate of the University of Southern California masters program, he has written over 50 books including the best-sellers The Arimathean, Every Number is Lucky to Someone and We Are All Characters.
See More Articles From Sean Leary
Tagged: covid-19 mitigationsevents closed down due to covid-19high school sportsIowaiowa governorkim reynoldskim reynolds announces covid-19 mitigationsyouth sports