Home › Articles › Events › I Pity The Fool That Don’t See Tomfoolery At Tremont In Davenport Tonight!

I Pity The Fool That Don’t See Tomfoolery At Tremont In Davenport Tonight!

Sean Leary January 15th, 2021 Events, Entertainment, Davenport, Comedy, Articles Share:
Tomfoolery on Tremont, at the Tremont mansion, 901 Tremont, Davenport, is presenting Geoffrey Asmus at 7 and 9:30 p.m. Jan. 15!
Table for 2 is $24; a Table for 4: $48
One of our favorites returns to Renwick! Geoffrey won Comedy on State’s “Funniest Person in Madison 2015” and Penguin Comedy Club’s 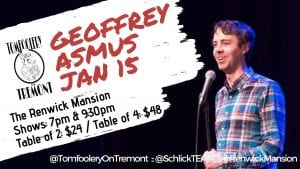 Sean Leary
Sean Leary is an author, director, artist, musician, producer and entrepreneur who has been writing professionally since debuting at age 11 in the pages of the Comics Buyers Guide. An honors graduate of the University of Southern California masters program, he has written over 50 books including the best-sellers The Arimathean, Every Number is Lucky to Someone and We Are All Characters.
See More Articles From Sean Leary
Tagged: ’ comedyChris Schlichtinggeoffrey asmusTomfoolery on Tremont