How About A Little Jelly Roll? It’s The Video You Deserve!

Well, today, you get both a hilariously cornball video and an incredibly catchy song, which actually sounds like two catchy songs smashed into one, although the video is more than double the laughs for its melodrama.

So, one of the most iconic ‘80s hard rock videos was “Here I Go Again,” by Whitesnake, which featured singer David Coverdale crooning his lone wolf power ballad as model/actress Tawny Kitaen writhed suggestively on the hood of a luxury sports car. It was simple, very effective, and iconic.

This is not that video.

Shortly after the success of that song and Whitesnake’s rise to fame, their guitarist/vocalist John Sykes left the English hard rock group due

to a massive ego clash with Coverdale. He formed a new group in 1988 called Blue Murder, also featuring bassist Tony Franklin, formerly of The Firm, with Jimmy Page, and journeyman drummer and mustache enthusiast Carmine Appice, who has been a vaunted stick man for a number of acts, most notably Rod Stewart. Vocalist Ray Gillen (ex of Black Sabbath) was added to that core, but quickly dropped, leaving the group as a trio of Sykes, Franklin and Appice, and they clicked. Blue Murder was quickly snapped up by Geffen Records, who were expecting Whitesnake Part Deux.

What they got was a pretty good approximation, as the band’s 1989 debut album, masterminded by Sykes, was a great mix of glam rock and power pop, filled with enough guitar crunch and odd hooks to put it in the Whitesnake range sonically, although it didn’t click as much commercially. Sykes blamed his label for the lack of smash success, saying that Geffen sandbagged Blue Murder, trying instead to get Sykes back together with Coverdale since Whitesnake, after their massive breakout, was starting to lag. Then grunge came along a couple years later, and Geffen, the album which capitalized the most by signing a little band out of Aberdeen, Washington, called Nirvana, really didn’t give two craps about either Whitesnake or Blue Murder.

But when they DID give two craps, or at least one, Blue Murder’s album did pretty well, getting good reviews and scoring with one big hit, which went to number 15 on the Mainstream Rock Chart. It was driven by its infectious hooks and interesting mix of sounds, its strange name and its video, which now looks incredibly cheesy, goofy and dated, and, well, in 1989, looked incredibly cheesy and goofy, and definitely of its time. 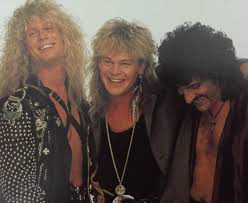 The song is a strange and interesting blend of sounds and tempos, going from acoustic to glam to funky groove pop to over-the-top power ballad in its denouement. The video is even more of a trip, as Sykes takes the starring role in a Fabio-esque romp of lion maned, shirtless, acid-washed grandeur, as he races sports cars, romps on horseback, sings shirtless in the rain and of course, pitches plenty of woo to a sexy actress/model of his own, his own Tawny Kitaen if you will, a woman by the name of Meg Register, whose acting credits included the hit films “Running Scared” and “Boxing Helena.” And you can tell what a fantastic actress she is from this video. Her lip syncing of the lyrics is pure magic, people. PURE FREAKING MAGIC.

Also magic? Pretty much everything about this colossal chuck of cheddar, from the blonde-haired telenovela plotlines to the scenes of shirtless horse grooming to Carmine Appice’s glorious mustache, glimmering in the stage lights, practically impregnating women with its machismo alone, to the magisterial finale, where Sykes, braving a crashing storm, rips his tank top off inexplicably, while Register, equally inexplicably, joins him outside, wearing a leather teddy, as they passionately embrace. THIS IS CALLED ROMANCE, PEOPLE!!! LOOK IT UP!!!!

Anyway, oddly enough, despite all of this wondrous music cinema wondrousness, “Jelly Roll” had a hard time getting regular airplay on MTV’s daytime roster, only really clicking on the metal niche program “Headbangers Ball,” and on the various other non-MTV video shows at the time like “Friday Night Videos” and “Night Flight.”

Why? Why did this video get essentially a cold donut shoulder from the biggest music video channel of the ‘80s? Speculation runs rampant, but the two most plausible theories floated were that Geffen actually asked MTV to put the brakes on airplay because they were trying to get Sykes and Coverdale back together, and that MTV’s standards and practices found out that the song’s title was given to it as an inside joke, and referred to a particular sex act. Naughty!

So, it’s Monday, and here, for your enjoyment, is a jelly roll…

Sean Leary
Sean Leary is an author, director, artist, musician, producer and entrepreneur who has been writing professionally since debuting at age 11 in the pages of the Comics Buyers Guide. An honors graduate of the University of Southern California masters program, he has written over 50 books including the best-sellers The Arimathean, Every Number is Lucky to Someone and We Are All Characters.
See More Articles From Sean Leary
Tagged: '80s videosblue murderboxing helenacarmine appicecheesy videosjelly rolljohn sykesmeg registermustache ridesthe firmtony franklinvideo you deservewhitesnake