Like millions of other people, I watched the inauguration of Joe Biden as president this week, in part to see if Kanye West was going to jump on stage and claim that he should’ve won the award.

But as I was watching Joe talk about how he was going to help millions of Americans in need, to help them get the aid they so desperately

seek, I couldn’t help but think of one particular person I hope is rescued from her situation.

The person I’m talking about is, of course, Alice, the maid on “The Brady Bunch.”

Recently, I spent a day laid up in bed, sick, with Gatorade and a TV remote as props to pass the time.

Flipping beyond the deluge of courtroom and self-help shows I found a real blast from the past.

I didn’t even realize old episodes of “The Brady Bunch” were still airing. When I was a kid, my siblings and I used to watch re-runs and make fun of them. But it’s been a long time since I’d seen it on TV. I figured it had been superseded by shows like “Saved By The Bell,” “Family Matters” and “Full House” on most programmers’ schedules. But nope, there it was in all its strange, anachronistic glory.

There are so many goofy things about “The Brady Bunch” that it’s impossible to list them all in such a limited space.

There are the bunk beds and the three-to-a-room setup, which was probably done so the show’s producers only had to build two bedroom sets and the scriptwriters could hold important moments of dialogue between the kids in central locations. 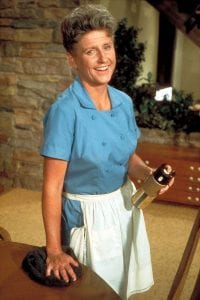 Alice. She couldn’t even afford a last name. Or a change of wardrobe, apparently.

(Yes, I know that’s the cue to begin the deluge of e-mails from hardcore “Brady Bunch” fans telling me the REAL reason for the bedroom layout. I sit waiting to be corrected. And waiting to delete all your e-mails.)

There are the bizarre fashions. The anachronistic dialogue. The astro turf lawn. The economic implausibility of that many kids and a maid on an architect’s salary.

And then there’s the situation of Alice, the maid.

Keep in mind that Mrs. Brady doesn’t work, so Alice is help for a stay-at-home mom whose kids are all in school. I guess if you’re a highly-paid architect, as Mr. Brady obviously is — snicker, snort — you can afford that sort of thing.

But Alice goes beyond just being a maid. She’s really kind of an odd, indentured servant.

For one thing, she’s rarely seen out of her blue uniform and hardly ever seen doing anything but working. Night and day, weekdays and weekends, Alice is on the job. Don’t the Bradys have to adhere to any labor laws?

Also, she lives at the house. In a shifty little area off the kitchen. What is this, medieval times, where the serfs work off their boarding on the lord’s manor? Off-camera, does Mr. Brady parade around with a giant turkey leg in his hand, placing a pox on the house of Doug Simpson and beckoning “fyne wenche Alice” to fetch him a flagon of ale?

Being tied to the Brady stead means little-to-no privacy and little-to-no life for the poor woman. She’s constantly on call. How many times have we seen Alice with some sort of mud mask on her face, a do-rag on her head, wrapped in her nightgown/high priestess robe, settling in for a well-earned night’s rest, only to be yanked out of bed by some strange sound, Brady family emergency or phony UFO scare perpetrated by an unruly kid. It’s really not fair.

Seriously, how did the Bradys fall into this situation? Did Alice lose a bet with Bobby and have to be the family’s slave for life? Did they 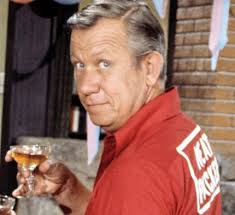 secretly purchase Alice as a mail-order bride for Sam the butcher to insure themselves fresh brisket for the remainder of their days? Or is she a communist spy, sent to infiltrate the residence in order to glean information on Mr. Brady’s work for the government that allows him frequent access to the celebrities and astronauts that pop in for family visits?

I’m not quite sure.

But I am pretty sure about the strangest thing in regard to “The Brady Bunch”: The fact that not only did it air on national TV, but that it was a huge hit. Think about it. At one point this show was the “Must-See TV” of its time. Millions of people set their evening schedules around watching it. And what’s more, they took it seriously. It wasn’t ironic or cheesy, it was the mainstream humor of its era to a significant segment of the audience.

Of course, 30 years or so on, that seems completely absurd.

It also makes you wonder, when you look around the current TV landscape, what shows will spur critics in 30 years to make the same bemused and bewildered observation.

One of my picks?

Trust me, 30 years from now, people are going to be saying, “Ok, so these dozens of attractive women all had to go on this show and act like they were that desperate for male companionship? What, did they lose a bet? Was Sam the Butcher already taken?”

Sean Leary
Sean Leary is an author, director, artist, musician, producer and entrepreneur who has been writing professionally since debuting at age 11 in the pages of the Comics Buyers Guide. An honors graduate of the University of Southern California masters program, he has written over 50 books including the best-sellers The Arimathean, Every Number is Lucky to Someone and We Are All Characters.
See More Articles From Sean Leary
Tagged: Alicealice the maidbobby bradybrady bunchcindy bradydoug simpsonfull housegreg bradyinaugurationjan bradyJoe Bidenjoe biden inaugurationKanye Westmarcia bradymr. bradymrs. bradypeter bradypresident joe bidensam the butchersaved by the bellSean Leary