“Do not desire to fit in. Desire to oblige yourselves to lead” – Illinois Poet Laureate Gwendolyn Brooks.

The new Gwendolyn Brooks Memorial Park Dedication will take place on the Western Illinois University Macomb campus beginning at 3 p.m. Saturday, June 12. The Park is located on the corner of Adams and Normal streets on the WIU-Macomb campus, on the site of the former Gwendolyn Brooks Cultural Center (GBCC). As COVID-19 restrictions remain in place, the event will be limited to 100 participants, 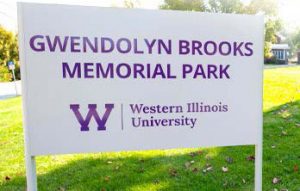 by invitation only. The dedication will also be livestreamed on WIU’s YouTube channel at bit.ly/WIUYouTubeChannel

The Gwendolyn Brooks Memorial Park was created is to honor the legacy of an American icon and award-winning poet, the Illinois Poet Laureate, Pulitzer Prize winner, nurturer of excellence and Western’s first Honorary Doctorate recipient.

According to Carl Ervin, program coordinator for the WIU Multicultural Center, the park is located on the ancestral lands of the Illinois (Inoca) indigenous people, and on the site of the former Black Cultural Center (BCC). The BCC was established in 1969 as a result of the WIU Black Student Association and a WIU student task force. It was dedicated as the Gwendolyn Brooks Cultural Center on March 21, 1970. The GBCC, also known as “The Black House,” served as a home away from home for 32 years before moving to the Multicultural Center in August 2009.

Sean Leary
Sean Leary is an author, director, artist, musician, producer and entrepreneur who has been writing professionally since debuting at age 11 in the pages of the Comics Buyers Guide. An honors graduate of the University of Southern California masters program, he has written over 50 books including the best-sellers The Arimathean, Every Number is Lucky to Someone and We Are All Characters.
See More Articles From Sean Leary
Tagged: gwendolyn brooks memorial parkWestern Illinois UniversityWIU