Kelly and Tammy Rundle of Fourth Wall Films have been busy doing outdoor shooting at a restored Bettendorf schoolhouse. The footage will be used in the Forest Grove School’s new museum film and their new documentary feature, Resurrecting Forest Grove. 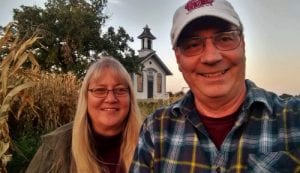 The Rundles’ are in post-production on the schoolhouse museum film and hope to have it wrapped in November.

Resurrecting Forest Grove’s release date has been pushed back to early 2022 due to the Covid pandemic.

“We are in fundraising mode again for the documentary,” producer Tammy Rundle said recently. “The pandemic has had an impact on many film projects in production, and Resurrecting Forest Grove is among them.”

“We are grateful to those who have been so supportive and generous during our fundraising campaign,” said director Kelly Rundle. “We are focused on raising a portion of the matching funds for a grant to complete the post-production phase on the documentary project.” 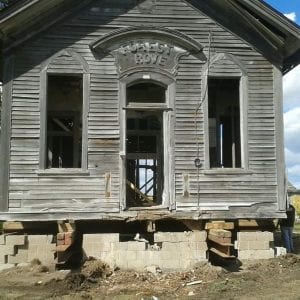 Resurrecting Forest Grove will cinematically tell the dramatic true story behind the seemingly-impossible task of restoring a crumbling 1873 one-room school located in Bettendorf to its 1920s appearance. Footage and interviews gathered over a seven-year period will illustrate the problems they faced and the solutions they employed as they attempted to bring this rural icon back to life.

The surprises and successes of this challenging restoration project will be intercut with a vivid historical portrait of the ‘Roaring 20s’ in rural America.

In 2012, a small group of local preservationists headed by project coordinator Sharon Andresen decided the 1873 Forest Grove School No. 5. could, and should, be saved.

“It has been an exciting experience to watch and document the ‘resurrection’ of Forest Grove over the past seven years,” Tammy Rundle said. “It took a dedicated and hard-working group of visionaries to bring the school back to life. It is an inspirational story that will make you think twice about saying, ‘It can’t be done.’”

“It’s extremely important,” Sharon Andresen of Bettendorf, head of Forest Grove School Preservation, said of the film in July 2019. “They’re so wonderful to work with. They’re good at what they do; we’re so honored they’d consider spending more time on this. They donated all 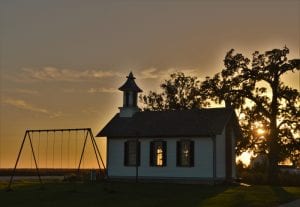 their time to document the restoration. We’re very excited.”

The documentary project received partial funding from a grant award from Humanities Iowa.

In 2009, the couple drove out to then-dilapidated one-room school in the country during a blizzard to gather footage for their award-winning and Emmy-nominated documentary Country School: One Room – One Nation.

For “Country School,” the husband-and-wife team filmed at more than 100 remaining one-room schoolhouses in Iowa, Wisconsin, and Kansas. Kelly Rundle said Forest Grove seemed special since it was “kind of big and ornate,” he said. “A lot of people are always saying about 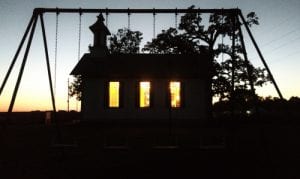 old buildings, they can’t be saved. As Tammy said, it’s a great example of people just having the will to do it.”

In August, Fourth Wall Films was honored by the Iowa Motion Picture Association as “Sons & Daughters of Thunder” — their docudrama about debates on the abolition of slavery — received seven awards, out of eight IMPA nominations. It won five top Awards of Excellence. 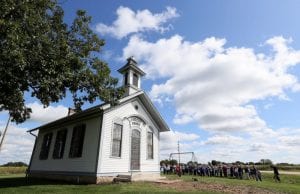 The historic schoolhouse after its restoration.

“Thunder” is available on DVD at LaneRebelsMovie.com or Amazon.com, and it can be streamed via Vimeo On Demand.

The Rundles are the owners of Fourth Wall Films, an award-winning and Regional-Emmy nominated independent film production company formerly located in Los Angeles, and now based in Moline. To contribute to the Forest Grove film project, visit ForestGroveMovie.com.

Jonathan Turner
Jonathan Turner has been covering the Quad-Cities arts scene for 25 years, first as a reporter with the Dispatch and Rock Island Argus, and then as a reporter with the Quad City Times. Jonathan is also an accomplished actor and musician who has been seen frequently on local theater stages, including the Bucktown Revue and Black Box Theatre.
See More Articles From Jonathan Turner
Tagged: country school: one room one nationforest grove school preservationFourth Wall FilmsKelly Rundlequadcities filmmakersTammy Rundle