Anyone else got a bad feeling about this?

Wednesday will mark the inauguration of Joe Biden as the 46th President of the United States, and all indications are that it’s shaping up to be a wild week and strange start to Biden’s administration — and it DEFINITELY will be, according to one notable Astrologer who has predicted the election win and other major events.

“There are multiple things going on on inauguration day that are worth discussing, however I said this before, I’m particularly concerned first about the 19th and then the night of inauguration day,” says Maren Altman, a famous Astrologer who has detailed a number of recent events and their charts on her TikTok, @marenaltman.

Why? Because there are some foreboding signs in the stars. 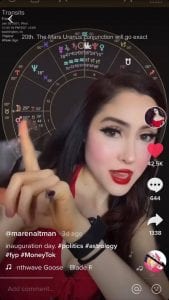 “Can you please stop giggling every time I mention Uranus?”

“Looking at the chart of Washington DC on the 19th and 20th the Mars Uranus conjunction will go exact and on the 20th during the inauguration ceremony the moon will be at the exact degree, 29 Aries, that Mars was at when the capital was infiltrated and all that went down,” Maren says on her TikTok.

“Previously I did say that the ceremony looks sleepy (pun intended? ok, maybe not…) because the Moon is in the 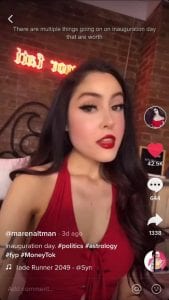 Expect to see a lot of riots and unrest this week, and not just in Taylor Swift’s love life! Whoh! HEL-lo! Thank you, thank you, please remember to tip your waitstaff…

12th, but I think that now, knowing that Mars was there when the riots took place, that there can be multiple overlays,”  Maren says. “For example, the ceremony is secluded and private and very safe, but there’s ongoing riots and violence in other locations because later in the day, that night, 3-4 a.m. on the 21st, the Moon will cross Mars and Uranus, and I know Trump will not be at the inauguration. This is happening in his 10th house of publicity as well. So the 19th and the 20th is a critical time.”

Trump’s personal Astrology reading coincides with that, and given the alignment of the stars and planets, it’s looks as if Trump will be launching a new career in a new media company. There are also signs that there’s going to be a rocky spring and summer especially in regard to his relationship to the Republican party. Certainly plausible if he launches or partners with a competitor to Fox News, as he’s talked about.

So, what about Biden’s upcoming months?

“In looking at Biden’s upcoming astrology for the next few months, inauguration day does look like one of the tensest times, like an unstable body or stressful period of Mars and Uranus and Taurus and the Moon joining it 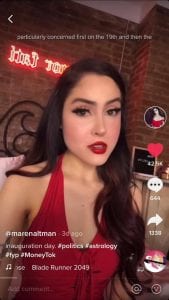 Inauguration week is shaping up to be a wild time, according to Astrologer Maren Altman.

atop his Moon and water fortune, this looks like a pretty unstable and tumultuous period,” Maren says. “However, with it happening on his lot of Fortune that’s usually an indication of protection, so I think that this represents that yeah there’s uprisings and riots and what not, but then he’s protected because obviously inauguration day has massive security.”

However, Biden will encounter unusual situations early on in his presidency, as his chart for late February and early March indicates, she says.

Not all will be bad for Joe, as the first two months beyond the inauguration strife look positive.

“There’s going to be a focus on his living situation or family, like this could be a really private, dreamy situation, but it looks actually like… it’s something with his family, a new beginning,” she said. 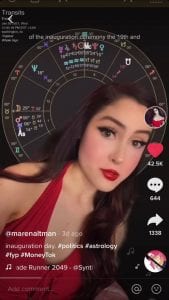 “Is there a gigantic Death Star map behind me?”

However, in late March his chart indicates that he’ll have “trouble with a known enemy or partner,” which she interprets to potentially be clashes with Republicans possibly over covid or budget issues… or something completely bizarre.

Like Bigfoot? Bigfoot? Are we finally going to hear about the confirmation of the existence of Bigfoot????

Ok, be coy. I’ll be waiting to see if it’s Bigfoot.

That would be far more interesting than just more political fighting between the two parties. Unless the Republican party unveils their latest candidate to be Bigfoot. Man, imagine that. Imagine if the Republicans put Bigfoot up for election in 2024, and the Democrats put up the Abominable Snowman, and it was secretly revealed before the election that they were both Yetis, and part of the same Illuminati bloodline of Yetis… 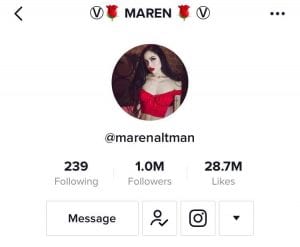 You can follow Maren Altman on TikTok for more Astrological interpretations.

Back to the usual political B.S. fighting. Go figure, we’re going to see more of that too, as both parties’ signs indicate battling, as well as a transformation for both, Maren says.

She also predicts massive social unrest in May and June 2021, and the unearthing of many secrets and “things that have been hidden.”

As for the coming decade, through 2032, there’s going to be a massive reorganization of the financial aspect of the world, and the U.S. in particular. (Bitcoin, anyone?)

There’s also likely to be wildfires and some food shortages in the summer, she says in addressing Nostradamus’ predictions for 2021, and notes that there are a lot of astrological indications that the United States, and the world, are entering into a number of new beginnings.

Nothing about Bigfoot though. Oh well, we can check his chart. We know he’s a Libra.

So, will Maren prove to be right? Hopefully if there are demonstrations, there’s no violence and nobody gets hurt. We’ll find out this week.

You can follow Maren on TikTok at @marenaltman, and check out her website as well for more insights.

Sean Leary
Sean Leary is an author, director, artist, musician, producer and entrepreneur who has been writing professionally since debuting at age 11 in the pages of the Comics Buyers Guide. An honors graduate of the University of Southern California masters program, he has written over 50 books including the best-sellers The Arimathean, Every Number is Lucky to Someone and We Are All Characters.
See More Articles From Sean Leary
Tagged: #astrologicalpredictions#donaldtrump#horoscopes#inaugurationday#joebiden#marenaltman2021abominable snowmanastrological predictions for 2021astrologyawake joebigfootcup o joeDemocratsDonald Trumpfox newsinauguration dayinauguration weekincredible hulkJoe Bidenjoe mamajoe schmowmaren altmanrepublicanssleepy joeWashington DCyetiyetis