‘War Of The Worlds’ Stomps Into Black Box

Sean Leary October 9th, 2018 Things To Do, Theatre, Moline, Local, Events, Entertainment Share:
The Black Box Theatre located in downtown Moline will present the original script of Orson Welles infamous “War of the Worlds: The 1938 radio script,” by Howard E. Koch and based on the novel by H.G. Wells. The production will open October 11 and run through October 21. 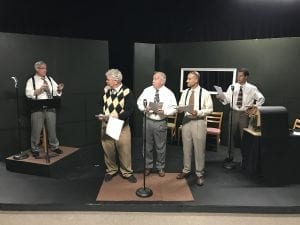 The Black Box Theatre cast includes James Driscoll, Matt Walsh, Scott Tunnicliff, Mark Ruebling and Michael Alexander. The production will be directed by Lora Adams with assistant director Sara J. Armstrong Kutzli, and stage manager Meredith Biechele.
“The War of the Worlds” was first performed and broadcast by The Mercury Theatre on the Air on Sunday, October 30, 1938. It was distributed by CBS, and produced by John Houseman and Orson Welles. The History channel tells of the historic night this way:  “Orson Welles was only 23 years old when his Mercury Theater company decided to update H.G. Wells’ 19th-century science fiction novel War of the Worlds for national radio, a realistic radio dramatization of a Martian invasion of Earth.  “War of the Worlds” was not planned as a radio hoax, and Welles had little idea of the havoc it would cause.
Sunday evening in 1938 was prime-time in the golden age of radio, and millions of Americans had their radios turned on. But most of these Americans were listening to ventriloquist Edgar Bergen and his dummy “Charlie McCarthy” on NBC and only turned to CBS at 8:12 p.m. after the comedy sketch ended and a little-known singer went on. By then, the story of the Martian invasion was well underway.”
Celebrate your Halloween October with the Black Box Theatre and “War of the Worlds.” Tickets are $16 and can be reserved at www.theblackboxtheatre.com
Advertisement

Sean Leary
Sean Leary is an author, director, artist, musician, producer and entrepreneur who has been writing professionally since debuting at age 11 in the pages of the Comics Buyers Guide. An honors graduate of the University of Southern California masters program, he has written over 50 books including the best-sellers The Arimathean, Every Number is Lucky to Someone and We Are All Characters.
See More Articles From Sean Leary
Tagged: Black Box TheatreDowntown MolineHG WellsJames DriscollLora AdamsMark RueblingMatt WalshMeredith BiecheleMichael AlexanderMolineOrson WellesSara J. Armstrong KutzliScott TunnicliffSean LearyWar of the Worlds