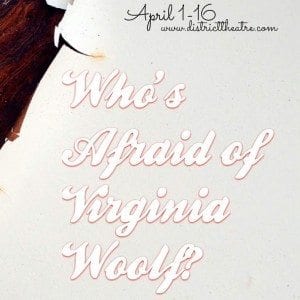 Who’s not afraid of seeing “Who’s Afraid of Virginia Woolf?” Well, anyone who fits into that category will want to know that District Theater in Rock Island is presenting the show April 1-16 on Thursday, Friday and Saturday at 8pm and Sunday at 2 p.m. at District Theatre in the former Rock Island Argus Building, 1724 4th Ave, Rock Island, IL 61201.

Tickets are $20 and you can get them at the theater and at www.districttheatre.com.

Directed by Tristan Layne Tapscott, “Woolf” is a “two-fisted thriller,” a tight blend of unforgettable characters and fast-paced comedy. The story centers on George and Martha, a quick-witted middle-aged college professor and his brassy, audacious wife. Played by veteran actors James Driscoll and Patti Flaherty, the caustic duo invite a young couple to their home for late night “fun and games.” As the liquor flows, Nick and Honey (Jonathan Grafft and Jenny Winn) find themselves in the center of an ever-shifting vortex where truth & lies merge, a witty and dangerous Battle of the Sexes. The evening turns explosive, with fireworks that one cannot soon forget.

Sean Leary
Sean Leary is an author, director, artist, musician, producer and entrepreneur who has been writing professionally since debuting at age 11 in the pages of the Comics Buyers Guide. An honors graduate of the University of Southern California masters program, he has written over 50 books including the best-sellers The Arimathean, Every Number is Lucky to Someone and We Are All Characters.
See More Articles From Sean Leary
Tagged: ‘Who’s Afraid of Virginia Woolf?’District TheatreJames DriscollJenny WinnJonathan GrafftPatti FlahertyRock Island ArgusSean LearyTristan Tapscott