The QC Ranks WHERE On Best St. Pat’s Day Parties??? 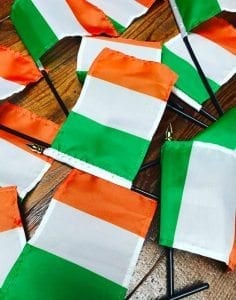 It’s St. Patrick’s Day, and we’re hoping you’re getting your Irish on today and throughout this weekend as festivities o’ the green have been rolling last weekend through this coming weekend.

However, that’s no surprise, and that pot of gold of events at the Quad-Cities end of the rainbow has been noticed on a national level.

This week, SafeCo Insurance and HomeInsurance.com analytics released a list of the the top 15 U.S. cities with the highest percentages of Irish descendants to join in their St. Patrick’s Day parades – and the Quad-Cities comes in at number 14.

Number one? Butte-Silver Bow, Montana. Yup, it’s a surprise to me too. As a guy of Gaelic descent, whose great-grandparents came over from Dublin and landed in Boston, who is named for Sean Connery, when I think of my Irish compatriots I typically do not think “Montana!”

Here’s what the leprechauns at SafeCo had to say about our beloved Quads:

“Davenport has a population of more than 381,913, with 55,543 claiming Irish ancestry. The Quad Cities—five cities located in four counties of northwest Illinois and southeast Iowa, and including Davenport, Rock Island and Moline—began their St. Patrick’s Day parade in 1985. Before the parade, the Saint Patrick Society of the Quad Cities hosts a “Gathering of the Clan Luncheon,” which recognizes the Irish Mother of the Year—a local mother who demonstrates pride in her Irish roots, and is heavily involved in family and community—introduces the Grand Marshal of the Grand Parade and awards a college scholarship. The parade stretches across state lines, beginning in Rock Island and ending in Davenport, and draws participants and onlookers from throughout the Quad Cities region.”

Traditionally, March 17 has been a day to recognize St. Patrick, the patron saint of Ireland, who helped popularize Christianity on the green isle and allegedly drove out those pesky snakes. Over the years, particularly over the last century, as the number of Irish immigrants grew in the United States, the holiday has become an oversized celebration of parades, wearing of the green, drinking, eating corned beef and cabbage, drinking, wearing Notre Dame jerseys, decorating the house with shamrocks, drinking, and more. And however you decide to celebrate the holiday today, or throughout the week, we hope you enjoy it!

Sean Leary
Sean Leary is an author, director, artist, musician, producer and entrepreneur who has been writing professionally since debuting at age 11 in the pages of the Comics Buyers Guide. An honors graduate of the University of Southern California masters program, he has written over 50 books including the best-sellers The Arimathean, Every Number is Lucky to Someone and We Are All Characters.
See More Articles From Sean Leary
Tagged: DavenportQuad CitiesSafeco InsuranceSt. Patrick’s Day