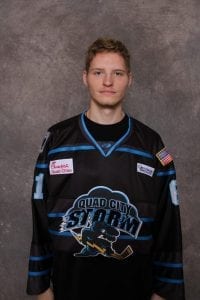 Perks was a member of the Storm’s training camp roster and released before the regular season roster was finalized.  He is a first-year pro and graduated from Northland College last year where he played for four years.

The Storm are back in action tomorrow night versus Peoria for the second battle in the Cold War on 74.  Fans can still get tickets for the game at http://www.quadcitystorm.com./.

Sean Leary
Sean Leary is an author, director, artist, musician, producer and entrepreneur who has been writing professionally since debuting at age 11 in the pages of the Comics Buyers Guide. An honors graduate of the University of Southern California masters program, he has written over 50 books including the best-sellers The Arimathean, Every Number is Lucky to Someone and We Are All Characters.
See More Articles From Sean Leary
Tagged: Cold War on 74hockeylocal hockeylocal sportsPeoriaQC StormQuad City StormTim Perks