Home » Articles » Entertainment » So, You Want to Write a Web Series… (A Slightly Fictionalized Memoir About the Making of “Against the Odds”)

So, You Want to Write a Web Series… (A Slightly Fictionalized Memoir About the Making of “Against the Odds”)

May 2015
“Hey, that’s me!”  I say it aloud while staring at my phone in the coffee shop.  The people at the next table look at me as if I spilled soup down my shirt.  After cleaning myself up (I have, in fact, spilled soup down my shirt), I read the Facebook status again.  Josh Kahn (The Ghost of Vaudeville, Bottoms-Up Burlesque, Blacklist) is asking his Facebook friends if anyone knows of anyone with screenwriting experience.

“Hey, that’s me!” is a slight exaggeration.  I had one co-written play produced and have various unproduced ventures – four episodes of a co-written 1930s radio series waiting for a studio, 95% of an historically-accurate Depp-free pirate movie screenplay waiting for a producer, and a Jack the Ripper musical waiting for a stage.  Still, I feel qualified to comment, so I do.  I tell Kahn that I am FAR too busy to take on another project, but I would be happy to hear his idea and give him pointers for how to move forward – because I’m a magnanimous genius.  He tells me the idea, and five minutes later I am the Lead Writer for a new web series.  I’m an idiot. 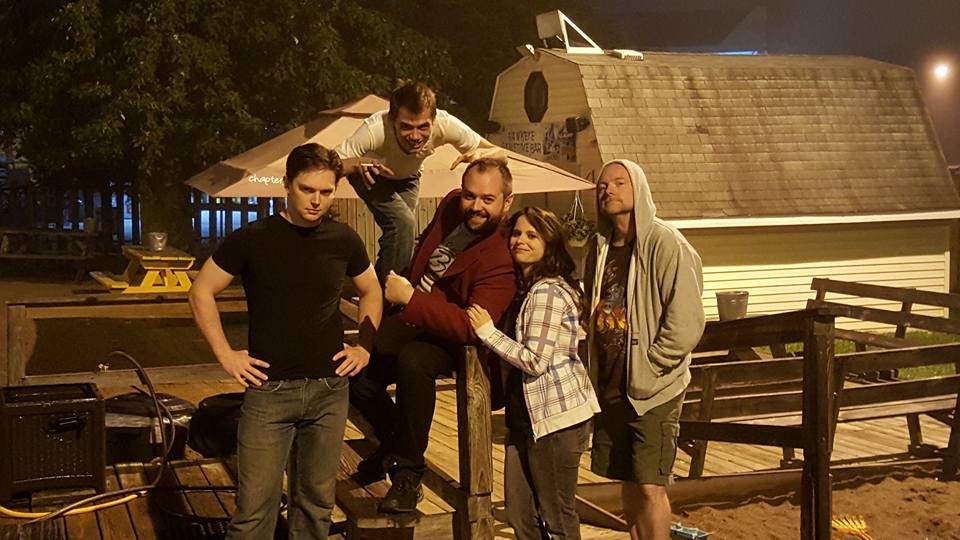 June 2015
Kahn has a premise – an aspiring comic book artist stumbles across a bar that caters to magical creatures.  He also has a major side character, Sin – someone with the ability to amplify people’s emotions with a touch.  That character is irreverent, slightly evil though not entirely bad, and basically an amiable jerk – Josh Kahn was born for this.  The show is basically “It’s Always Sunny in Philadelphia” meets “Being Human.”

I take the premise home for a weekend and knock it around.  By Sunday, I have a seven-episode arc, plotted out so that half a dozen characters are fully-rounded with actual personalities and stuff.  I throw in some characters to amuse myself – a Scottish leprechaun (for my heritage), a fish-man (for H.P. Lovecraft), a pied piper (why not), a sexy witch (because sexy witch).  I name the bar “Odds” – and the show becomes “Against the Odds.”  Kahn loves it and shouts my glory to the hills.

Writing with Kahn is easier than I would have thought.  He and I settle into a rhythm that does not change much over the course of the series.  The pattern essentially is this – we discuss what needs to happen in a scene, I write for a few minutes, I ask for ideas/corrections, I write for a few more minutes, I read back what I have, we Kahn makes suggestions/corrections, I edit, I read it back, and we move on to the next scene.
While working on Episode 1, we occasionally have other funny people in the room while we write, and they are welcome to throw out ideas, some of which make it into the script.  But it quickly becomes a two-man show, with Kahn and I cranking out scenes, fueled by take-out food and assorted beverages.

July 2015
The first episode is written, but not every character is represented yet.  This is a problem because we have to cast the show.  So, we start working on writing sides for the auditions, as well as borrowing scenes from other movies/shows to represent character traits.  Some of the sides we write will later become full scenes for Episode 2, but we don’t know that at the time.  We hold two days of auditions at the Circa 21 Speakeasy.  It’s a mixed bag.  Dozens of people audition.  Some people we expected to do well, didn’t.  Others blew the roof off the joint.  The person we most wanted to audition for the part of Bryan (the comic book artist) does so and he nails it – so, Anthony Natarelli joins the cast.  He is soon followed by Devin Alexander (Thomas, the bar owner), Molly Wilkison (Molly, the sexy witch), Ben Rollins (Ken, a comic book store owner) Broc Nelson (Angus, the Scottish Leprechaun), and others.  We have to track down our preferred choice for the lead female role (Diana, an emotional telepathist, or empath).  We audition Jess Denney while she is on a break at work, and she nails it.

August 2015
Shooting is underway and we have to recast Chase (the Sasquatch).  James Palagi is ready to step in, but because of the timing, we have to move his introductory scene to Episode 2.  We get access to Vista International Operations, the Circa 21 Speakeasy, and Mellow Blue Planet for sets.  The Hawkeye Tap is the key location – the set of Odd’s.  It means shooting at 3 a.m., but we commit to the pain.  To direct Episode 1, we “import” Josh Davidson (“Favorite Refrain”).  He tackles the job professionally, cranking out Episode 1 with the help of Andrew Edmark on camera/editing and Seth Kruse on sound.  This gives us a solid footing moving forward.

October 2015
Kahn and I write Episode 2 as Episode 1 is being shot and edited.  Episode 2 turns out to be a lot easier, because now we have faces to go with many characters and personalities to fit to the actions and dialogue.  Wayne Lyter comes in at the last minute to play the role of Andrew the Dragon, and brings it hard.  Every future episode with that character just became easier to write.

November 2015
With some of Episode 1 shot and edited, we put together a GoFundMe campaign to pay for props, make-up, and (with luck) catering for those long overnight shoots.  The number rises slowly, but every $1 donated is $1 not coming out of our strained personal budgets.  Also, thanks to Devin’s contacts, we have the use of music from local bands, including Waking Robots, Kangaroo, Post Mortems, and Cthulhu Ferguson.  It’s good to know talented people!!

December 2015
The GoFundMe result took a lot of pressure off of us, but we could have used a lot more.  Even so, we work hard to finish shooting Episode 2, with Andrew Edmark directing.  Easier said than done – it turns out getting more than three people on the same schedule is daunting, particularly when so many are juggling local theater productions at the same time.  Why did we decide to work with so many talented people??

January 2016
Episode 2 finishes shooting at the District Theater just as Episode 3’s script is ready.  By now, Kahn and I are in a total rhythm and cranking out increasingly epic/hilarious/stupid scenes.  Almost by accident – almost – we manage to raise the bar in every episode.  The characters are alive and the dialogue really starts to write itself.  New characters are emerging to fill the gaps.  We have a pre-teen dropping an F-bomb.  Hope that goes well.  We feel like we almost know what we’re doing – almost.

Big premiere for Episode 1 at Skellington Manor, and it’s pretty much a disaster.  The lighting isn’t optimal (we didn’t test it ahead of time) and the DVD player starts skipping (we didn’t test it ahead of time).  Most of us start drinking heavily, promising the crowd that an un-skippy version will be online quickly.  We feel like we will never know what we’re doing.

February 2016
We started shooting this show in the SUMMER, and now it’s WINTER.  Those trees no longer have leaves.  So, we shoot around them.  It sucks for the cast, because they are still wearing summer clothes.  I notice this while shooting in the alley behind Circa 21.  I’m on script/slate duty, wearing a sweater and a hat, sipping a hot coffee for which I forgot the sugar.  Our all-female gang members wear skirts and sleeveless shirts.  We suffer for our art in different ways.

March 2016
Episode 2 goes into a long delay, for a variety of reasons.  One, we see the things we would have done differently in Episode 1.  Two, we have ADR dubbing to record and sync.  Three, we are now adding visual and sound effects.  Collectively, these things slow down post-production for Episode 2.  At the same time they influence how we shoot Episode 3, directed by Kahn, which is well underway by now.  The pre-teen dropped an F-bomb.  It went well.

April 2016
Episode 3 shooting continues.  We are plagued by Natarelli’s hair, which for some reason continues to grow (he needs it for a show or something).  It is becoming difficult for him to hide his flowing locks under such a small hat.  I fear for that hat.

May 2016
We launch the series website, complete with a re-mastered version of Episode 1.  It looks and sounds amazing.  Meanwhile, Episode 2 is languishing in post-production and Episode 3 is now in the can, too, thanks to shoots at Atlante and Skellington Manor.  People keep asking for the next episode.  We can’t believe anyone still has faith in us.

June 2016
Episode 2 is out!  Whew!  Now we fight technological and scheduling issues for Episode 4, now directed by Andrew Edmark.  One of our leads is out for the entire month doing another show.  Another lead is periodically ill.  We have re-scheduled shoots, yet Episode moves along, with the expectation that it will take most of July before shooting is complete.

July 2016
Episode 5 is written!  That leaves two more to write.  These three to be directed by three different first-time directors.  No pressure, except one of our leads/directors might be moving away in September.  Kahn and I panic, thinking we might need to shoot all of his remaining scenes over two months!  We crank out 1/3 of Episode 6 in one night.

Present Day
We have now been at it for more than a year and are still in love with the show.  More importantly, everyone on camera for the series so far is still on board (knock on wood).  Despite the hiccups and recasting and delays, we have had unprecedented luck and continue to receive support from the community.  That’s how a small-budget local web series can work.

Now, as a bit of a reward for our work so far, the cast and crew is preparing to host a screening of Episode 2 followed by a Q&A panel at QC Anime-zing! (RiverCenter, Friday night, 6 p.m.).  Nerd cred: rising.

Soon this show will be wrapped and we’ll be onto another web series already in the planning stages.  We can’t tell you what’s happening next, but we hope you’ll be there to see it. 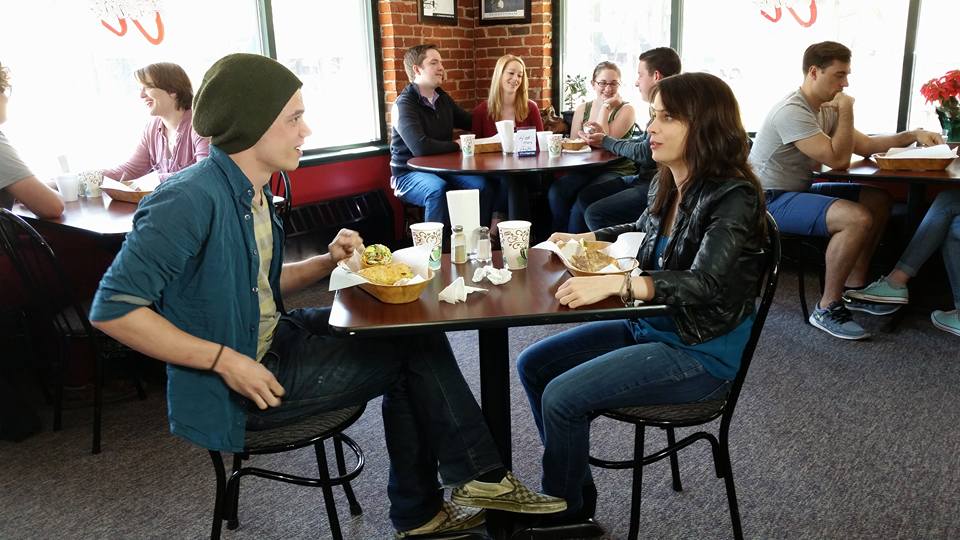 Note: ‘Against The Odds’ will be debuting as a regular program on QuadCities.com VERY soon . . . stay tuned! The following is a first-person account of the making of the series, as told by one of the series’ co-creators (with Josh Kahn), Paul-Thomas Ferguson…

Sean Leary
Sean Leary is an author, director, artist, musician, producer and entrepreneur who has been writing professionally since debuting at age 11 in the pages of the Comics Buyers Guide. An honors graduate of the University of Southern California masters program, he has written over 50 books including the best-sellers The Arimathean, Every Number is Lucky to Someone and We Are All Characters.
See More Articles From Sean Leary
Tagged: Against The OddsCthululu FergusonDevin AlexanderJess DenneyJosh KahnJoshua KahnMolly WilkinsonNikki GillettePaul FergusonPaul-Thomas Ferguson