‘Shear Madness’ Is A Hilarious Slice Of Fun

Circa ‘21’s “Shear Madness” is “sheerly” hilarious, a wild, raucous romp that lives up to its name. With a terrifically talented cast that exudes a goofy sense of fun every moment they’re onstage, it’s a must-see for anyone looking for a funny night out.

As the longest-running non-musical theatrical production worldwide, the snappy show has been cutting up audiences for decades around the globe, including Circa, and for good reason, it’s a wonderful showcase for talented improvisational performers while retaining the outline of an entertaining premise that promises laughs. 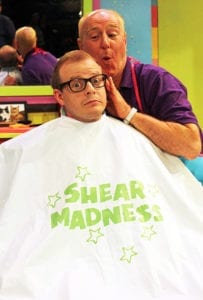 “Shear,” like shows like “Curb Your Enthusiasm” and films like, well, anything featuring Christopher Guest, is built on a framework of a story and certain plot and dialogue parameters, within which the actors can roam around and run around like kids on recess, making up whatever fun and funny things may pop into their heads.

The framework conceit is this: The gig begins in a “local” hair salon, Shear Madness, run by flamboyantly swishy Tony Whitcomb (Tom Walljasper) and bombshell Barbara DeMarco. In various stages of shaves and stylings are the customers Mikey Thomas (Tristan Tapscott), Eddie Lawrence (Cory Boughton), Nick O’Brien (Brad Hauskins) and Mrs. Shubert (Sherry Konjura). For most of the beginning of the show, the audience is just observing the usual snap and patter within a typical salon, catty banter and saucy commentary, with the work moving at a snail’s pace and the conversation zipping by like a cheetah on meth.

It’s hilarious stuff, full of broad, goofy humor spiced with plenty of innuendo, and this cast of comedy giants nails it, as the audience on opening night was pretty much front to back laughter in this very loose expository moment of the show. 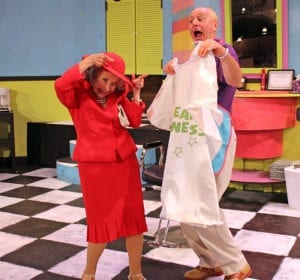 As this is occurring, we hear the clanging piano notes of an upstairs neighbor who seems to have gotten on the nerves or occupied the interest of all of the occupants of the barber shop at one time or another.

Until the music stops.

And then the show shifts pace, into a fun game of “Clue,” with the audience participating.

We find out the neighbor has been murdered, two of the customers have been undercover cops investigating a plot against her, and everyone else is a suspect. That opens the pandora’s box to the second half of the show, in which they interview each of them, and ultimately the audience decides who’s guilty.

If you’re reading this and it all sounds like an incredibly fun experience, you’re exactly right. It’s a fantastic show. Every time I’ve seen “Shear Madness” I’ve enjoyed it, but I can’t recall enjoying it as much as I have with this cast that Circa has assembled.

Tom Walljasper is a genius of an actor, both dramatic and comedic, and his Tony Whitcomb is one of his finest and funniest roles, a tornado of attitude and sass and slicing one-liners that can’t help but crack up the audience, and, on the night I saw the show, crack up his fellow castmates more than a few times.

Jennifer Poarch is a saucy foil to his Whitcomb, with her comments and jibes and a look that screams like a gaudy fourth of July float. 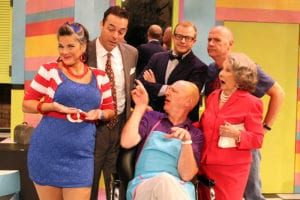 Tristan Tapscott is always a great physical comedian, and here plays the frustrated and awkward Mikey to perfection, especially in his interactions with Walljasper.

Brad Hauskins is likewise always terrific, and here, while he’s predominantly the straight man, pitching setups to the others, his timing is fantastic and his presence acts as a great wall for the bouncy ball of Whitcomb to smash against.

And perhaps the most underrated but terrific performance is Cory Boughton as the greasy Eddie Lawrence. Boughton is the character you love to hate, but he’s also slick and smart and has some great sarcastic and cutting lines.

In all, it’s a fantastic show that you really have to see an experience at least once. And, as the actors point out, if you enjoy it as much as I did, you can certainly come out and see it again, knowing that the show is never the same from night to night, not just because of the prodigious amount of improvisation throughout but also because the ending of the gig depends upon the votes of the audience members. On any given night of the week you could see any of the characters end up as the guilty party.

It’s easy to see why “Shear Madness” has been such a lengthy hit. It doesn’t feel like a show, it’s an immersive performance that feels like a fun evening of party games and jokes between friends. It’s a great night out that’s a great night in. It’s at Circa through Sept. 27, you can get your tickets at the box office, 1828 3rd Avenue, Rock Island, or you can call (309) 786-7733, ext. 2, or go to www.circa21.com.

Definitely check it out.

Sean Leary
Sean Leary is an author, director, artist, musician, producer and entrepreneur who has been writing professionally since debuting at age 11 in the pages of the Comics Buyers Guide. An honors graduate of the University of Southern California masters program, he has written over 50 books including the best-sellers The Arimathean, Every Number is Lucky to Someone and We Are All Characters.
See More Articles From Sean Leary
Tagged: ‘Shear MadnessBrad HauskinsCirca '21Cory BoughtonDenny HitchcockJennifer Poarchlocal comedylocal theaterSherry KonjuraTom WalljasperTristan Tapscott