Quiet Riot with The Sweet & Blackfoot at The Rust Belt

Experience Quiet Riot, The Sweet and Blackfoot LIVE at The Rust Belt (533 12th Avenue East Moline) this Saturday Mar 14. Doors open for this all-ages show at 7 p.m. and the music begins at 8 p.m. Tickets are just $35 and can be purchased online now. 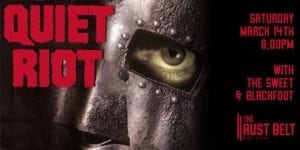 Quiet Riot
Quiet Riot is a rock & roll phenomenon. Famously described as the first heavy metal band to top the pop charts, the Los Angeles quartet became an overnight sensation thanks to their monster 1983 smash album Metal Health. Their followup album Condition Critical went double platinum and the band continued to record and tour throughout their 25 + year history.

The Sweet
Legendary rock band Sweet (aka The Sweet) shot to the top of the charts in the 1970s, selling over forty million records with such hits as “Ballroom Blitz,” “Fox on the Run,” “Love is Like Oxygen,” “Little Willy,” “Blockbuster,” “Hellraiser,” “Action,” and many others. Even during that decade of excess, Sweet stood out with a charismatic stage presence and a relentless, innovative fusion of grinding hard rock and melodic vocal harmonies that was far ahead of its time.

Blackfoot Band
Blackfoot was originally formed in 1970’s by Rickey Medlocke, current lead guitarist of Lynyrd Skynyrd. Blackfoot has always been defined by their hard rock edge, evident on their most successful singles “Train, Train” and “Highway Song.” In 2012, Medlocke recruited a completely new line-up of the band to continue the music of Blackfoot for new generations.

Tess Abney
Tess Abney was born and raised in the Quad Cities. Her passion for writing and entertainment was apparent at a very young age. Whether it is sharing local events and businesses with readers or sharing her thoughts on life, she finds comfort in the way words can bring people together.
See More Articles From Tess Abney
Tagged: blackfootEast MolineEventslive musicQuad Citiesquiet riotThe Rust BeltThe SweetThings To Do