Quad-Cities Getting Stormy With A Chance Of Makin’ It Rain

Sean Leary February 10th, 2020 Things To Do, Local, Events, Entertainment, Davenport Share:
Things are going to be getting a little Stormy in Davenport, with a high chance of playas makin’ it rain.
Former Donald Trump hookup and adult entertainment star Stormy Daniels will be in the Quad-Cities Friday, March 13, not to get Harris Pizza (ok, well, maybe that too) for the grand opening of the new strip club, Deja Vu Showgirls, at 5220 Grand Ave., Davenport, in the old Tuxedo’s spot. 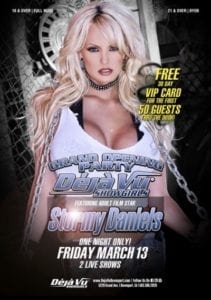 Stormy, who rose to fame in the adult film world and rose to mega-fame when it was revealed that Donald Trump had allegedly paid her, via his former attorney Michael Cohen, almost a quarter-million dollars in hush money before the 2016 election, will perform at 11 p.m. and 1 a.m. Cover is $10; there’s no additional charge for the Stormster’s shows. Da club, da club, opens at 7 p.m. that night for its grand opening celebration.
Deja Vu, based out of Las Vegas, bills itself as the largest erotic entertainment group in the world, owning over 200 locations.
Stormy will hold a meet-and-greet session and pose for pictures with patrons that evening.
And, as always, as Chris Rock said, just a friendly reminder that there is NO sex in the champagne room.
For more information, or just to check out the adult entertainment venue’s new digs you damn pervs, see Showgirls Davenport – Deja Vu®
Advertisement

Sean Leary
Sean Leary is an author, director, artist, musician, producer and entrepreneur who has been writing professionally since debuting at age 11 in the pages of the Comics Buyers Guide. An honors graduate of the University of Southern California masters program, he has written over 50 books including the best-sellers The Arimathean, Every Number is Lucky to Someone and We Are All Characters.
See More Articles From Sean Leary
Tagged: adult entertainmentDeja Vu ShowgirlsLas Vegaslocal clubslocal strip clubsStormy Daniels