The Quad City Hash House Harriers – Dirty Pirate Chapter (or QCH3), a local group that is part of the loosely affiliated international organization, the Hash House Harriers, and a self-described “Drinking Club with a Running Problem,” will hold their 10th Annual Red Dress Run on Saturday, February 15, in which all participants – male and female – wear red dresses to have fun and draw attention to this charity event. 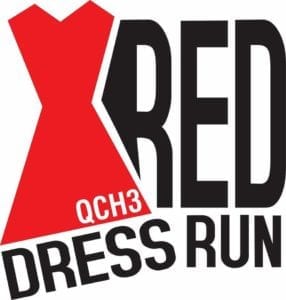 Participants will gather at 12:00 p.m., at Billy Bob’s QC,  1722 2nd Avenue, Rock Island, IL. Runners will take off just after 2:00 p.m.. In true hashing tradition, the route will be determined that day and marked with chalk or flour by the “hares.” The non-competitive run will include stops for games, contests, adult beverages, and socializing. The post-run celebration (“on-afters” in hash terms) will also take place at Billy Bob’s and will include food and a DJ.

All proceeds and donations from this year’s run will be go to Dress for Success Quad Cities, a local non-profit that empowers women to achieve economic independence by providing a network of support, professional attire and the development tools to help women thrive in work and in life. They are part of a global movement for change highlighting women’s employment issues throughout more than 150 cities and 25 countries around the world. The goal of the organization is to offer long-lasting solutions that enable women to break the cycle of poverty and obtain safer and better futures. The Quad Cities affiliate serves under-employed and unemployed women in Eastern Iowa and Western Illinois by providing business-appropriate clothing, job-search support, mentoring and professional development programs.

Last year’s run raised a record $17,500 for Friendly House of Davenport, a local non-profit that offers a variety of services to respond to the needs of children, families and seniors through quality, affordable services that will enrich lives and strengthen our neighborhoods and the community. Approximately 250 people participated. 2018’s QCH3 Red Dress Run raised more than $13,000 for Ribbons for Kellsey.

“The Red Dress Run is not so much a run as a gathering of people with good senses of humor, adventurous spirits and charitable hearts … and red dresses.”
– Quad City Hash House Harriers – Dirty Pirate Chapter founder Nathan Tackett (Raw Deal)

About Hashing: Hashing was started in 1937 by British expat  – A.S.I. Gispert (or simply “G” as he was known to his friends), living in Malaysia, and is based on an old English game called Hares and Hounds. The group was named after the place many of the Kuala Lumpur-based Brits lived and ate – the “Hash House,” with the addition of the typical Hounds and Hares team moniker “Harriers.” Thus was born the first Hash House Harriers. After WWII, the practice started to spread worldwide, and then really caught on and began growing exponentially in the early ’70s. There are currently about 2,000 active chapters (or kennels) worldwide, including about 400 in the U.S.

2020’s Red Dress Run is the 10th such event for the Quad Cities Hash House Harriers. The first event had fewer than 20 participants. QCH3’s Red Dress Run now regularly sells out at 250 participant capacity, drawing runners from hash groups all over the country and has donated more than $50,000 to local charities.

Tess Abney
Tess Abney was born and raised in the Quad Cities. Her passion for writing and entertainment was apparent at a very young age. Whether it is sharing local events and businesses with readers or sharing her thoughts on life, she finds comfort in the way words can bring people together.
Tagged: 2020Dirty Pirate ChapterEventsQC HashersQCH3Quad CitiesQuad City Hash House HarriersRed Dress RunThings To Do