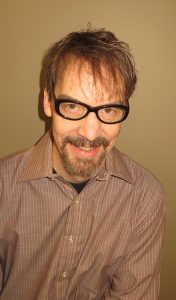 Local label Cartouche Records will deliver a cool sonic one-two punch this weekend with a pair of new albums, Devin Frank, “The Vanishing Blues” and Chrash, “Things My Friends Say,” which will hit stores and online music spots on July 15.

Both acts were featured in last weekend’s live showcase at Daytrotter and played to appreciative crowds. Frank is a former member of Iowa indie rock band Poison Control Center.  “The Vanishing Blues” is his first solo album.  Chrash is a Quad-Cities mainstay featuring Chris Bernat of the hugely successful ‘90s indie rock band Tripmaster Monkey.  “Thing’s My Friends Say” is the first Chrash release to be recorded by the band in their own studio.

Recently, Cartouche founder and leader Bob Herington took some time out of his busy schedule to answer a few questions for me. And even more recently, I took some time out of my busy schedule to write the questions and answers down into a story so you could read them. Aren’t you lucky? I think so. I hope you agree after you read more about this cool local label . . .

Q: How long has Cartouche been around, when did you officially debut, and what led you to start up a record label? What’s your background in music?
Cartouche Records started about three years ago, but our first release was just over two years ago (Bedroom Shrine).  The label started when I and Jason Parris decided to start a label after hearing Bedroom Shrine’s finished record recorded at the Horseshack (Daytrotter studio) and after hearing J.E. Sunde’s record when it was being mixed by Pat Stolley at Future Apple Tree Too Studio in R.I.  J.E. Sunde was in the band Daredevil Christopher Wright that I had seen a few times and really dug.  I was blown away by Sunde’s record and played it for Jason and he agreed that this was an amazing record and we  decided to start the label.   Jason and I had put out two local music compilation albums prior called “Hello Quad Cities,” that featured local indie music artists.  After the first two releases, Jason became too busy to continue with the label so he relinquished his interest in the label solely to me and my wife, Lynn.   As far as my background in music goes,  I’ve worked in and owned record stores since 1984, first working for CoOp Records in Davenport and then purchasing three CoOp stores in Illinois.  In 2005 I sold my CoOp stores and opened Ragged Records in Davenport, where we focused on new and used vinyl.  I’ve also been involved in promoting many live shows over the years.  I helped start the River City Blues Society in Peoria in the 1980’s where I was head of the entertainment committee,  promoted shows, and helped organize educational events promoting Blues history at Bradley University and the Peoria public library.

Q: What is the philosophy and goal of the label?
I did not go into this with any intentions of making a bunch of money.  We did this as way to help our friends, promote local and regional music, and help put the Q-C music scene on the map.  The main thing that I wanted from doing this was that I wanted to be able to step back years down the road and be proud of the releases we put out.  I think so far we’re nailing it.

Q: Obviously, it’s not just local artists though, so how do you recruit, scout and pick acts from out of town?
We never intended to just put out local bands, but more wanted to put out bands we liked and enjoyed, and had played in this area.  Some of the bands we had seen were brought here by Daytrotter.   Our most recent early June release was Kalispell, whom I was introduced to by J.E. Sunde after releasing his record.  Shane Leonard (Kalispell) was a friend of Sunde’s and was looking for someone to release his crowd-funded LP.  After hearing his record it was a no-brainer for me.  Kalispell is an amazing meld of folk/jazz/classical and other influences running the gamut from Talk Talk to Bill Frisell and Philip Glass.  Shane is a member of the band Field Report and recorded his record with Grammy award-winner Brian Joseph (Bon Iver, Sufjan Stevens).  I am a fan of interesting singer/songwriters and have several more on my radar for the future, including an early 2017 new record from J.E. Sunde.

Q: What’s it like running a label? Is it a lot more or less work than you thought? What are the greatest rewards?
It is far more work then I could have imagined.  I see now why labels have teams for PR, radio, social media, web design, and art layout.  Most of this I had no idea how to do, so I’ve been learning as I go.  I’ve had great help from friends and other locals that have wanted to help.  They understand that this is not a big money making venture so have been working for little to no compensation.  Mostly guys that have been in and around the local music scene for many years including Gary Heitman, Jeff Konrad, Jon Burns, Pat Stolley, and Johnnie Cluney.  Local photographers and film makers Josh Ford (Ford Photography) and Harry Walker.  These guys and others have been a huge help.  Sean Moeller of Daytrotter has been very supportive by having our acts in for sessions and playing live shows.  It’s definitely more about community and not about profits.

Q: How do you feel about the artists on the label and those that played at last weekend’s showcase?
That’s a pretty obvious question.  I think the artists on the label are amazing, each in their own way.  Bedroom Shrine is not really a touring act, but just too good to not have records out.  J.E. Sunde is, sincerely in my opinion, one of the greatest singer/songwriters I’ve ever heard and I’ve been involved in the music business for 35 years.  I feel truly honored to be able to release this guy’s records.  This is one of my proudest achievements in the music business.  Brooks Strause and Land of Blood and Sunshine are hands down two of the best in the state of Iowa.  Brooks is truly the godfather of Iowa freak folk and amazingly prolific.  The Multiple Cat and Chrash are Iowa legends.  Pat Stolley of The Multiple Cat is a somewhat undiscovered genius.  He’s been putting out records for well over 20 years and has never found huge success but has always had a loyal following locally and outside the area.  The Multiple Cat continues to put out 100% relevant indie pop.  Chrash is fronted by Chris Bernat of Tripmaster Monkey fame.  Iowa’s 90’s indie darlings.  One of our most recent releases is Kalispell (Shane Leonard).  Kalispell is very forward thinking indie folk fusion.  Folk music outside the box.   Devin Franks, one of our two releases for July, is everything I like about ‘60s influenced psych folk.  Fresh but drawing on influences like Donovan and Kevin Ayers.  This is Devin’s first solo release after fronting the Des Moines indie rock band Poison Control Center for 10 years.

Q: What do you have planned for the future?
The only thing I’m a liberty to talk about is a new release from J.E. Sunde in early 2017.  I am currently looking at a few other things for 2017 and on.
As for what those things are, stay tuned, and tuned in to Cartouche Records.

For more information on Cartouche Records and their artists, go to https://cartoucherecords.com/artists   or follow them on facebook https://www.facebook.com/CartoucheRecords.

To listen to the acts and other Cartouche artists, click here:
Kalispell:
Brooks Strause:

Sean Leary
Sean Leary is an author, director, artist, musician, producer and entrepreneur who has been writing professionally since debuting at age 11 in the pages of the Comics Buyers Guide. An honors graduate of the University of Southern California masters program, he has written over 50 books including the best-sellers The Arimathean, Every Number is Lucky to Someone and We Are All Characters.
See More Articles From Sean Leary
Tagged: Bedroom ShrineBob HeringtonCartouche RecordsChrashDaytrotterDevin FrankJ.E. SundePoison Control CenterRagged RecordsTripmaster Monkey