Sean Leary February 10th, 2019 Quad City Storm, Moline, Local, Events, Entertainment Share:
The Quad City Storm, “the team that gives back,” hosted a Hockey Fights Cancer Weekwhich began with a Paint the Ice Event on February 6 and ended with a win over arch rival Peoria Rivermen on February 9. The game drew a crowd of over 5,000 and raised $21,700 for Gilda’s Club of the Quad Cities. 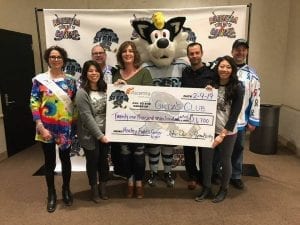 The Storm’s Giving Back Campaign, #QCSTORMCARES, has now raised over $64,700 in only 16 games with hopes to raise $100,000 for local charities before the season ends in April.
Watch for other updates and announcements on our website (www.quadcitystorm) and follow along with us on our social media platforms on Facebook (search Quad City Storm), Twitter (@QuadCityStorm), Instagram (@qcstorm). Our office hours are Monday through Friday 9:00am-5:00pm and Saturday by appointment only and our team can be reached by calling 309-277-1364.
Advertisement

Sean Leary
Sean Leary is an author, director, artist, musician, producer and entrepreneur who has been writing professionally since debuting at age 11 in the pages of the Comics Buyers Guide. An honors graduate of the University of Southern California masters program, he has written over 50 books including the best-sellers The Arimathean, Every Number is Lucky to Someone and We Are All Characters.
See More Articles From Sean Leary
Tagged: #QCSTORMCARESGilda’s ClubGwen TombergshockeyHockey Fights Cancerlocal hockeylocal sportsPeoria RivermenQ-C StormQuad City StormTaxSlayer CenterTristan Tapscott