Home › Articles › Sports › Plenty Going On With The Q-C Storm!

Plenty Going On With The Q-C Storm!

There’s plenty going on with the Quad-Cities Storm this week! The hockey team has been active in roster changes and more. Here’s the rundown: 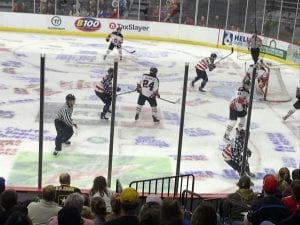 Patrick Harrison has been signed by the Quad City Storm. Harrison is a

defenseman from Vernon, Ontario and is in his fourth year playing

professional hockey. He has spent time in the FHL and SPHL and played in

nine games this season with the Roanoke Railyard Dawgs.

Caligiuri Returns And Stewart Is Released

Vinny Caligiuri has been activated from the injured reserve. Caligiuri racked

sidelined him for eight games.

Hunter Stewart has been released by the Storm.

Misovic was a member of the Quad City training camp roster. He has played in eleven games this season with the Danville Dashers and recorded an assist, 21 penalty minutes and a +1 on-ice rating.

Sean Leary
Sean Leary is an author, director, artist, musician, producer and entrepreneur who has been writing professionally since debuting at age 11 in the pages of the Comics Buyers Guide. An honors graduate of the University of Southern California masters program, he has written over 50 books including the best-sellers The Arimathean, Every Number is Lucky to Someone and We Are All Characters.
See More Articles From Sean Leary
Tagged: Austin HerveyhockeyHunter Stewartlocal hockeyOndrej MisovicPatrick HarrisonQuad City StormTaxSlayer CenterVinny Caligiuri