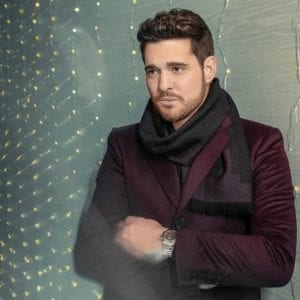 Smooth crooner Michael Bublé will be performing at the TaxSlayer Center on May 14. Tickets go on sale at 10 a.m. Monday, Nov. 18 at the TaxSlayer box office and all Ticketmaster outlets.
Michael’s 2020 U.S. Tour will include stops at TD Garden in Boston on March 25 and T-Mobile Arena in Las Vegas on May 9. This past February Bublé returned to the U.S. after a lengthy absence for a sold out 37 show tour where he performed for over 500,000 fans. His 2019 world tour included 82 shows in front of over 1.2 million people. He has already completed five sold out world tours, won four Grammy Awards, and sold over 60 million records over the course of his extraordinary career.
For more info see http://www.michaelbuble.com.

Sean Leary
Sean Leary is an author, director, artist, musician, producer and entrepreneur who has been writing professionally since debuting at age 11 in the pages of the Comics Buyers Guide. An honors graduate of the University of Southern California masters program, he has written over 50 books including the best-sellers The Arimathean, Every Number is Lucky to Someone and We Are All Characters.
SeanLeary.com
See More Articles From Sean
Tagged: local concertsMichael BubleTaxSlayer Center