Catch a rare live performance from Marcy Playground, with Elizabeth Moen, this Friday Dec 13 at The Rust Belt. Doors open at 8:30 p.m. with opening act beginning at 9 p.m. and Marcy Playground taking the stage at 9:45 p.m. 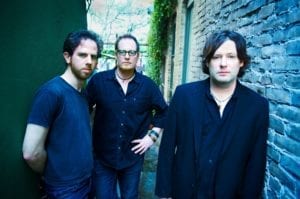 With the release of “Sex and Candy,” the multi-platinum trio Marcy Playground overtook Oasis on Billboard’s Modern Rock chart for most weeks at #1, lasting a then record-breaking 15 weeks. But while casual fans continue to solidify that songs timelessness (with 53 million+ streams on Spotify and 20 million streams on its official Youtube channel, alone,) the groups impressive lot of hardcore fans truly come for the other consistently-smart songs that lead singer/songwriter, John Wozniak, ushered in with the group’s debut album in 1997. Not ones to reject an intimate relationship with its fanbase, the 2010s saw Marcy Playground catering to its music-making fans in rare, interactive, intimate ways when it called for its them to remix the 13 songs from its more recent album Leaving Wonderland in a Fit of Rage. It physically released a collection of those submissions onto CD in 2010. But, In 2017, it answered pleas from all fans by releasing its landmark, international smash hit debut on vinyl for the first time.

With a discography of 6 albums and a resume that includes two other Billboard Alternative-charting hits (“St. Joe On The School Bus” and “It’s Saturday,”) appearances on Woodstock ’99 & The Late Show with David Letterman, a cover of its “Sex & Candy” performed by contemporary artist Allen Stone (watched 5 million times) and countless recent tour dates with its contemporaries, Everclear, Lit, Gin Blossoms, Sugar Ray, Fuel, Dishwalla and others, Marcy Playground’s singles are still in circulation on rock radio today and continue to satisfy the fans that came along in the beginning….and those who are just discovering the band for the first time now.

Tess Abney
Tess Abney was born and raised in the Quad Cities. Her passion for writing and entertainment was apparent at a very young age. Whether it is sharing local events and businesses with readers or sharing her thoughts on life, she finds comfort in the way words can bring people together.
See More Articles From Tess Abney
Tagged: East MolineElizabeth MoenEventsMarcy PlaygroundMoeller NightsQuad CitiesSex & CandyThe Rust BeltThings To Do