Lyle The Crocodile Swims In As Circa’s New Kids’ Show 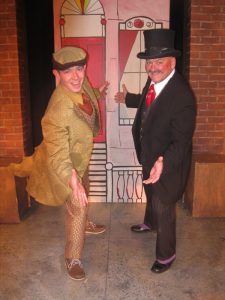 One of America’s most popular children’s-book characters is ready to jump-start the summer in the Circa ’21 Dinner Playhouse presentation “Lyle The Crocodile,” opening this week and running through July 23 at the Rock Island dinner theatre. A delightful musical adapted from Bernard Waber’s kids’-lit series, this magical family entertainment is filled with laughter, songs, and happiness, and boasts a first-rate cast of professional talents.

Ticket prices are $8.50 per person and can be reserved by contacting the Circa ’21 ticket office at 1828 Third Avenue, Rock Island, IL or by calling (309) 786-7733, extension 2. You many also make reservations online now and pick your seats at www.circa21.com.

“Lyle” is the story of a friendly crocodile who turns up in a bathtub in an apartment in New York City’s Upper East Side. Lyle becomes good friends with the folks in the building – except for Mr. Grumps, who hates Lyle, parades, people, and pretty much everything. However, when Lyle rescues Mr. Grumps and his cat Loretta from a fire, Mr. Grumps has to apologize for the way he’s treated Lyle, who helps those around him learn that they should not judge others by how different they appear to be, and learn to love people – and crocodiles – for what they are. Featuring an endearing title character and many fun-filled songs, “Lyle” is sure to capture the hearts of family audiences of all ages. The show is being directed by frequent Circa ’21 director/performer Andrea Moore, who is also the theatre’s Operations Manager and whose performance credits for the Circa ’21 include roles in such musicals as “Cats,” “Grease” and “Joseph.”

Sean Leary
Sean Leary is an author, director, artist, musician, producer and entrepreneur who has been writing professionally since debuting at age 11 in the pages of the Comics Buyers Guide. An honors graduate of the University of Southern California masters program, he has written over 50 books including the best-sellers The Arimathean, Every Number is Lucky to Someone and We Are All Characters.
See More Articles From Sean Leary
Tagged: Ben KlockeBernard WaberCirca '21Janos Horvathkids’ showsLyle the CrocodileRock Island dinner theater