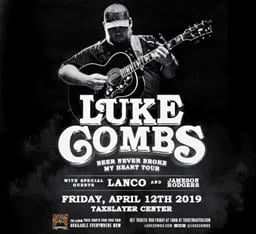 A native of Asheville, North Carolina, country singer/songwriter Luke Combs took joy in singing from a young age. During his high school years, Combs split his time between football and singing in local vocal groups, eventually picking up the guitar while attending college at Appalachian State.

Taking inspiration from some of country’s leading men like Tim McGraw and Luke Bryan, he began writing songs and soon released a pair of EPs in 2014. In 2015, his single “Hurricane” reached the Top Ten on iTunes’ country chart and he quickly followed up with his third EP, This One’s for You, later that year. Over the course of 2016, “Hurricane” continued to gain steam, winding up at number one on Billboard’s Country Airplay charts in May of 2017. The single’s success led to Combs signing with Riverhouse/Columbia Nashville, which released his full-length debut, also called This One’s for You, in June 2017. Along with “Hurricane,” the album featured two other chart-topping singles with “When It Rains It Pours” and “One Number Away.”

Tess Abney
Tess Abney was born and raised in the Quad Cities. Her passion for writing and entertainment was apparent at a very young age. Whether it is sharing local events and businesses with readers or sharing her thoughts on life, she finds comfort in the way words can bring people together.
See More Articles From Tess Abney
Tagged: Beer Never Broke My Heart TourcountryEventsLuke CombsMolineQuad CitiesTaxSlayer CenterThings To Do