Midwest Monster Fest 2020 proud to announce scream queen legend and Quad Cities native, Linnea Quigley will be one of the headliners at this year’s fest!!!

Linnea Quigley was born in Davenport, Iowa, on May 27, 1958 growing up there and going to Davenport High School. After moving with her family to Los Angeles in the late 1970s, In LA she was encouraged to try modeling and acting. She soon began getting small parts in commercials and B-movies, such as “Stone Cold Dead” (1979) and “Wheeler” (1975). Her breakout role was in “The Return of the Living Dead” (1985), which has gone on to become a cult classic, and established her firmly as “Queen of the Bs”. Her reign was supreme throughout the 80s with such films as “Graduation Day” (1981), “Night of the Demons” (1988), “Silent Night Deadly Night” (1984) and “Hollywood Chainsaw Hookers” (1988) and over 160 other credits total since. Linnea continues to appear in, and produce films. She also appears at Horror Conventions around the globe, where she is a fan favorite. After more than 40 years and more than 160 films, Linnea Quigley is still “America’s Scream Queen”. 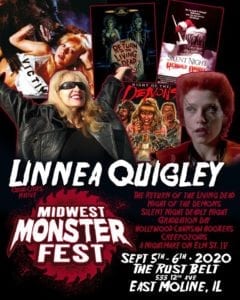 QuadCities.com is proud to be a sponsor once again of the festival. For more information see:

Sean Leary
Sean Leary is an author, director, artist, musician, producer and entrepreneur who has been writing professionally since debuting at age 11 in the pages of the Comics Buyers Guide. An honors graduate of the University of Southern California masters program, he has written over 50 books including the best-sellers The Arimathean, Every Number is Lucky to Someone and We Are All Characters.
See More Articles From Sean Leary
Tagged: Jeff O’NealLinnea Quigleylocal festivalslocal horror sceneMidwest Monster FestRust Belt