G.I.T. Improv and The Black Box Theatre of the Quad Cities are excited to announce a new partnership which sees the The Late Nite Shows – a popular line-up of original, uncensored comedy performances – make their long-awaited return at The Black Box Theatre, located at 1623 5th Avenue in downtown Moline, this Saturday.

“It’s so funny – at just about every show we’ve done over the past 6 months, people have continuously asked, ‘When are you bringing back the late shows?!’,” said Patrick Adamson, co-founder and CEO of G.I.T. Improv. He laughingly added, “Well, we finally have your answer – and it’s this Saturday night.”The Late Nite Shows will debut in their new venue with it’s longest-running show, Wisenheimer – who are celebrating their 8-Year Anniversary. “Wisenheimer started what would become The Late Nite Shows all the way back in December of 2011, and has since gone on to develop a solid reputation nationwide,” said Adamson. “It only felt right they be the ones to kick off our run at The Black Box.”In addition, Wisenheimer will be joined by special guests, Chowdown Improv, from Des Moines, IA. “Chowdown was gracious enough to invite us to perform numerous times at their home,” said Jeff De Leon, a co-founder of Wisenheimer. “We’re excited to return the favor and give our audiences an opportunity to see a talented group they normally would not have access to.”The entire suite of uncensored shows – including such favorites as 309, Survivor, and Shakespeared! – will all return as well as space being given for new shows to debut. “We love having this venue as not just a showcase space, but also as an incubator,” said Jeff Adamson, co-founder of G.I.T. Improv. “Improv is ever-evolving, and while the shows we have are all proven successes, we want to continue challenging ourselves by coming up with new shows as well.” 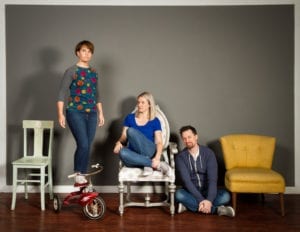 Lora Adams, co-owner of The Black Box Theatre, is excited to see her venue expand in yet another new direction. “Our space has evolved so much since opening,” said Adams. “In addition to our regular season of shows, we also perform radio plays, showcases for local artists, and even host podcast recordings.” Adams continued, “Being able to add this established and talented improv troupe to our venue is a truly welcomed opportunity.”Wisenheimer’s anniversary show starts at 7 p.m. with all other Late Nite Shows beginning at 8 p.m. for the remainder of the month. Admission to all shows is $10 with tickets available at the door or online at LateNiteShows.com. Their announced December line-up is as follows:

The Late Nite Shows schedule will be updated monthly on both their website and Facebook page.G.I.T. Improv is an elite national improv comedy touring company. Formed in 1997, G.I.T. Improv brings decades of experience combined with a vast knowledge of pop culture making our shows ideal for any audience. For booking inquires and show opportunities, please contact us at 309.786.1111, follow us on Facebook and Instagram, or visit our website at GITimprov.net.The Black Box Theatre, located in the heart of Moline in the Quad Cities, offers up an eclectic season of live theatre experiences for all audiences. Our seasons are always lively with an eclectic lineup of plays and musicals, and our space welcomes local artists as well. Visit us online at TheBlackBoxTheatre.com.The Late Nite Shows are uncensored comedy performances featuring improv, sketch, and stand up on select Saturday nights at The Black Box Theatre in Moline, IL, and are produced by G.I.T. Improv. Find out more information on shows and schedules at LateNiteShows.com.

Sean Leary
Sean Leary is an author, director, artist, musician, producer and entrepreneur who has been writing professionally since debuting at age 11 in the pages of the Comics Buyers Guide. An honors graduate of the University of Southern California masters program, he has written over 50 books including the best-sellers The Arimathean, Every Number is Lucky to Someone and We Are All Characters.
See More Articles From Sean Leary
Tagged: Black Box TheatreChowdown ImprovComedy SportzEstablishment TheaterGiTJeff DeLeonLate Nite Showslocal comedylocal theaterPatrick AdamsonWisenheimer