‘Last Five Years’ Up Next At Black Box Theatre

The Black Box Theatre in downtown Moline will present the musical “The Last Five Years,” opening March 28.  The Drama Desk winner is an intimate musical about two twentysomething New Yorkers who fall in and out of love over the course of five years, with the woman (Cathy) telling her story backwards, while the man (Jamie) tells his story chronologically. The two characters only meet once in the middle at their wedding. Written by Jason Robert Brown, who is known for his work writing songs for the Broadway musical “Parade”, “The Last Five Years” was born out of his own failed marriage. The show went on to be named one of TIME Magazine’s ten best shows of 2001. 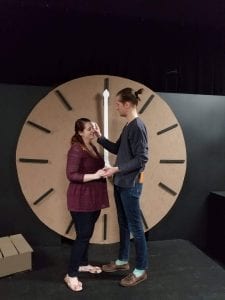 Kathryn Jecklin will be portraying Cathy. She has appeared on the BBT stage in “Clue: The Musical” and “The 25th Annual Putnam County Spelling Bee.” “One of the more interesting elements of this production is that our leading lady is expecting, so we made some accommodations,” said director David Miller laughing. Sharing the role of Cathy will be Kailey Ackermann who will appear twice. Playing opposite the “Cathy’s” is Zach Hendershott, who has appeared on the Black Box stage in “Next to Normal” and “I Love You, Because.”

Jonathan Turner is music director and on keyboard, with Michael Wahlmann, cello, and Josephine Trenary, violin.

Tickets are $16 and available at theblackboxtheatre.com.

Sean Leary
Sean Leary is an author, director, artist, musician, producer and entrepreneur who has been writing professionally since debuting at age 11 in the pages of the Comics Buyers Guide. An honors graduate of the University of Southern California masters program, he has written over 50 books including the best-sellers The Arimathean, Every Number is Lucky to Someone and We Are All Characters.
SeanLeary.com
See More Articles From Sean
Tagged: Black Box TheatreKailey AckermannKathryn JecklinLast Five Yearslocal theaterLora AdamsMolineZach Hendershott