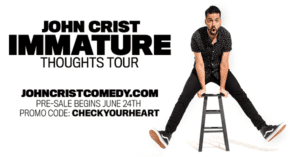 Comedian and viral sensation John Crist is the next big thing in stand-up comedy. Whether you know him from viral videos like “Millennial International,” “Road Rage in the Church Parking Lot,” or “Every Parent at Disney,” Crist has solidified his comedic prowess with sold out shows from coast to coast.

Crist has shared the stage with some of the best in the business, including Dave Chappelle, Jeff Foxworthy, Seth Meyers, Larry the Cable Guy, Trevor Noah, Dana Carvey, Adam Carolla, Chris D’Elia, Anjelah Johnson, Tim Hawkins, and Louie Anderson. Anderson says of Crist, “It’s only a matter of time until John Crist is a household name. He is so likable and his stand-up is top notch.”

Sean Leary
Sean Leary is an author, director, artist, musician, producer and entrepreneur who has been writing professionally since debuting at age 11 in the pages of the Comics Buyers Guide. An honors graduate of the University of Southern California masters program, he has written over 50 books including the best-sellers The Arimathean, Every Number is Lucky to Someone and We Are All Characters.
See More Articles From Sean Leary
Tagged: Adler TheatercomediansDisneyJohn Cristlocal comedy