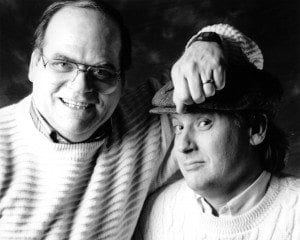 Don’t be sad this St. Patrick’s Day, don’t be sullen, don’t be disappointed you can’t find a good time and some great Irish music, because the Don’t Be Brothers are ready to turn those don’t’s into do’s.

The Don’t Be Brothers, an Irish American Folksingers and Merrymakers Band, roll into Circa on Tuesday, March 15.  Tickets are $50.16 per person.  The doors open at 5:45, buffet (with Irish themed options) from 6-7:00 and the concert beginning at 7:15.

The Don’t Bes are a couple of old Irish pub singers — Larry Kernagis and Larry Diemer — and three of their musically talented friends.  Larry and Larry have been making music together for nearly 30 years and they say their goal is to create folk and Irish fun, both for themselves and their audiences. “People come to feel the joy of having roots somewhere – even if they’re Irish wannabes,” Kernagis said.  Asked about the unique name of the group Diemer said the band’s name was inspired by such varied sources as the Doobie Brothers and the Mr. Do Be character on the children’s television show “Romper Room.”

The band mixes things up in their sets, rolling from rich ballads to foot-stomping pub tunes including such hits as “Molly Malone,” “McNamera’s Band,” “The Wild Rover,” “The Scotsman’s Kilt,” “The Naughty 7 Old Ladies Got Stuck In The Lavatory” and many more.

Circa ’21 Producer Dennis Hitchcock is excited to present THE DON’T BE BROTHERS. “When I first listened to a Don’t Be Brothers  CD,  I immediately wanted to book them,” Hitchcock said. “I know everyone who comes to hear them at Circa ’21 will have a raucous time and leave in the perfect mood to celebrate St. Patrick’s Day. Their music is touching, boisterous and great fun. Why not, they’re Irish.”

Larry Kernagis is also excited for the show. “It will be great to see old friends and hopefully make some new ones!”

Reservations are available through the Circa ’21 ticket office.  For reservations, contact the theatre at 1828 Third Avenue, Rock Island, IL or by calling (309)-786-7733 extension 2.

Sean Leary
Sean Leary is an author, director, artist, musician, producer and entrepreneur who has been writing professionally since debuting at age 11 in the pages of the Comics Buyers Guide. An honors graduate of the University of Southern California masters program, he has written over 50 books including the best-sellers The Arimathean, Every Number is Lucky to Someone and We Are All Characters.
SeanLeary.com
See More Articles From Sean
Tagged: Circa '21Dennis HitchcockDon’t Be BrothersIrish AmericansIrish musicLarry DiemerLarry KernagisRock IslandSean LearySt. Patrick’s DayThe District