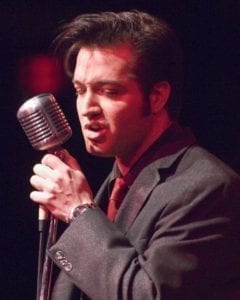 Door times for the evening performance are 5:45, buffet from 6 to 7 and concert at 7:15 p.m. Tickets for the evening show are $56.10. Doors open for the matinee performance at 11:45, with a plated lunch from 12 to 12:45 and concert at 1 p.m. Tickets for the matinee performances are $50.33 per person. Tickets for either show may be purchased at Circa ’21 located at 1828 3rd Ave. in Rock Island or by calling the ticket office at 309-786-7733, ext. 2.
The holidays were a special time for Elvis Presley, and during his lifetime, he released three albums of songs to celebrate the season.  Robert Shaw and the Lonely Street Band are back for a Rock ‘n’ Roll holiday extravaganza!  This heartwarming show features some of The King’s best loved holiday favorites mixed in with a healthy dose of hits from throughout his career.
When you see Robert’s amazing performance, you will know immediately why the Arizona Daily Star said “Shaw’s firm grasp of Presley’s powerful vocals are keeping The King’s spiritual legacy alive.”

Mr. Shaw is also well known across the country from his time with both the Chicago and New York casts of Broadway’s smash-hit musical “Million Dollar Quartet” where he portrayed Elvis and Johnny Cash. Robert also has become a favorite of Circa ’21 audiences with his wide range of shows portraying legendary performers such as Johnny Cash, Elvis, Bobby Darin and his exciting salute to Sun Records. The theatre is also pleased that Robert will be back this New Years Eve with his show “Good Rockin’ Live – A Salute To Sun Records.”  Tickets are on sale now.
Tickets are selling fast to BLUE CHRISTMAS so the theatre encourages you to call soon to make your reservations.
Advertisement

Sean Leary
Sean Leary is an author, director, artist, musician, producer and entrepreneur who has been writing professionally since debuting at age 11 in the pages of the Comics Buyers Guide. An honors graduate of the University of Southern California masters program, he has written over 50 books including the best-sellers The Arimathean, Every Number is Lucky to Someone and We Are All Characters.
SeanLeary.com
See More Articles From Sean
Tagged: Blue ChristmasCirca '21Elvis PresleyElvis tributesLonely Street BandQuad CitiesRobert Shaw